“I wasn’t sleeping. I couldn’t get up out of my chair. I had trouble getting the door open and out of the car. I was starting to feel my age,” said Leola Schell.

She’s 80. As good an age as any to start CrossFit.

Enter Kent Stamey, the owner of CrossFit Hickory and a man who is CrossFit to the core. In fact, on his core—his stomach—is a 6-inch tall tattoo of CrossFit’s Pukie the Clown mascot. And while the shaved-headed, mustachioed, heavily-pierced father of five kids (aged 14 to two—“It has something to do with the water in the trailer park,” he jokes) has never thrown-up during a workout, he did learn the hard way that the concept of “scaling” is essential. He believes that scaling is the secret to his success with Leola Schell and the way to go for new CrossFitters of any age and adiposity.

After a month and a half, Schell was doing four sets of 20 squats, three sets of ten pushups, hoisting herself up on a rope for 3 seconds, and performing other feats of strength and agility that had been long beyond her. She was also getting a full night of sound sleep and “popping up and down out of bed” like a jack-in-the-box. By three months, she was starting to do the regular WOD.

Written by Roy Wallack, the CrossFit Journal senior editor, this is the fitness story of an 80-year-old guinea pig named G-Ma. 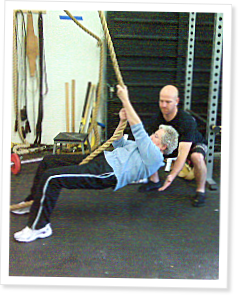 This is the first part of a complete training session that Mary Conover, 77, had with Jim Baker at CrossFit Santa Cruz Central, where he is a trainer and co-owner.

About 3 1/2 years ago, at the age of 69, I was fretting because I couldn't pick up my 13-pound granddaughter. I figured that in order to get her into my lap, I… Continue Reading

Great article. Think Ill print this one out for the old folks at work to read!

I couldn't help but notice that the last page is Page 5 of 4.

Now I bet everyone's going to download it to check.

When I was reading this I noticed the same thing and thought "hey, its the senior editor's article and the page count is messed up?"

Great job for G-Ma, I know my dad worries about falling, he has had both his knees replaced. I did get him to go paleo-ish zone so he can drop some weight!!!

Great work Kent and Gma! I'm impressed with your style and gumption. Would that I could have had this for my grandparents ... Paul

One of my favorites for my "g-ma's" and "g-pa's" is lay down on your back and stand up 10x as quickly as you can. At first I don't care how they do it, use a chair, kneel, lay on their front then roll over, etc. Then I begin to take away things until they are not allowed to cross their feet and eventually get into performing loaded deck squats...Thanks for the article and way to go G-Ma

Wow -- this is an awesome testimony to the benefits of fitness at every age. Great job in getting inventive w/scaling! very cool...

So inspirational. G-Ma's my hero. What's my excuse for not showing up 100%? Got none now. Great article.

My 70 year old parents have started crossfitting and it has made wonderful differences in their lives. They are an inspiration! :)

This is the essence of CF........universal scalability. Great job to Kent and G-ma!