Bill Starr coached at the 1968 Olympics in Mexico City, the 1970 World Olympic Weightlifting World Championship in Columbus, Ohio, and the 1975 World Powerlifting Championships in Birmingham, England. In this article, Don’t Muddle the Middle, he writes about how to get through that sticking point in the middle of lifts.

Whenever someone starts on a strength program, his primary objective is just to get in the work on a regular basis. How the various exercises are done isn’t usually a great concern at this stage, just so the form is adequate enough to complete the workouts. And that’s okay. In the beginning, when relatively light poundages are used, form mistakes don’t matter all that much. So it’s only natural for the athlete to assume that as he gets stronger and lifts heavier weights, technique won’t matter; he’ll continue to be able to redirect the misguided bar on any exercise.

Very few strength athletes pay as much attention to the middle portion of an exercise as they do the start and finish. Yet, that part is one-third of the equation for any exercise. Without a solid middle, the finish will not be nearly as strong and on max attempts this spells failure.

This works for me: Do a perfect start, then follow through behind that momentum immediately. This will eventually be condensed to: Start-Middle. Next, identify the weaker areas in that middle range and get to work strengthening them. When this is done, all the exercises in your program will benefit, and rather quickly.

Ultimately, improvement is the name of the game in strength training. In order to make consistent progress and achieve a higher level of overall strength, the middle must be given equal status and not treated like an inconsequential stepchild. 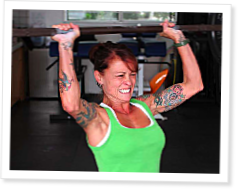 Bill Starr explains a simple way to plan a week’s worth of lifting for maximum gains.

Knowing how to utilize the heavy, light and medium system in your strength… Continue Reading

2 Comments on “Don’t Muddle the Middle”

that's something you don't normally hear around these parts!

Coming off of Daniel's comment, stopping at the bottom of a squat is also anathema in this community, but the point here is in strengthening and correcting deficiencies, not necessarily developing a long-term movement or habit. At least, that is my take.