In this part 7, Kelly demonstrates the PNF “non-stretching” technique for lengthening muscles. In this case, Kelly works the hamstring through both joints. The resulting lengthening is both obvious and dramatic.

This is the seventh of a series from Kelly on the theory and practice of stabilizing the midline in functional movement. 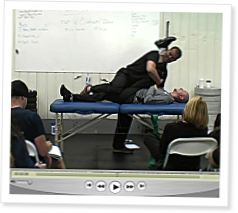 There are 24 comments on this article. Login to add your own.

Jason Khalipa may not be working at his full capacity—and how scary is that?

The 2008 CrossFit Games champ clearly has the capacity to do a lot work very quickly, and he’s incredibly strong… Continue Reading

Tissue healing has three phases, Kelly Starrett told participants at a one day seminar at CrossFit Santa Cruz on March 14, 2009. Starrett is the owner of San Francisco CrossFit and a… Continue Reading

When you say stretch both ways are you referring to 1. knee locked, leg fully extended and 2. knee bent, leg bend?

how often does Kelly do these seminars? i went to his site and didn't see anything. I would love to attend one.

Wow. So if you do it 5 times a day (or 3, for that matter), how long do you think it'd take to have an A or B before doing this type of stretch? And once you get there, what's the maintenance?

Troy, here's my opinion: It will most likely take a couple of weeks to gain a functional length on the stretched muscle. When that range of motion is gained by this technique it's more a matter of using that range (ie concentric and eccentric contractions) than maintaining it through the stretching. The PNF technique just uses the neuromuscular anatomy to take advantage of a fully relaxed muscle. So when the you teach yourself to change your lifting technique or running technique, etc, after this PNF stretching, you will then be using that newly gained range of motion and eventually will maintain it. That is ideal, however. More likely you will have to do this the rest of your life, because of your typical motor activation patterns. But what's the big deal? Just a couple of minutes a day to maintain that added flexibility to accomplish new goals and fend of back pain. This focus on core stabilization and hip mobility will change the way you function in life. Hope that's not too much info and hope I'm not butting in.

Thank you so much for posting this series. It is EXACTLY what I've been looking for.

If anyone is interested in seeing Kelly Starrets "Training the Injured Athlete" seminar (the one shown in the video), CrossFit Lineage will be hosting one on April 25th and CrossFit Santa Cruz is having one in the middle of March (I believe).

We are physched to have him out here in Edmonton AB and would love to see some CrossFitters from across the map come out and join in.

great video again. can you recommend any book about pnf stretching
techniques. i'd like to get more information and background material.

thx for all the superb information!!!!

I first heard about this kind of stretching from "The Wharton's Complete Book of Fitness". It's a three part book, one part focuses on stretching (PNF). Goes in detail, lots of pictures of lots of stretches. I tried it for a week or so a couple years ago and kind of gave up on it (my own fault). Watching these seminars by Kelly though are terrific and I just might start doing it again. The way Kelly explains this stuff and shows it makes it easier to grasp than just reading.

Don't remember is the Wharton's invented this way of stretching or not...but it should be insightful to you.

The end-range of the muscle is weaker. I use similar techniques with patients and athletes and the following is what I have found. The new range is weaker and thus the body will tighten it back down as what seems to be a protective mechanism. If someone's hip extensors are tight, limiting them from a deep squat, and creating a butt wink we release the adductors and have them squat. The new depth is noticible immediately. However, the new range will only last a few reps before it automatically starts to revert. This is because the new range is weaker, fatigues quicker, and the body adapts back to the stronger movement. Rehabilitation comes from stopping the movement as form starts to falter, re-releasing the tension in the hip extensors, and having them squat again. Perform this over a few weeks until the new depth is just as strong as the old depth. At this point, you can simply use a dynamic warm-up with some PNF for the stubborn areas and you'll be off and running.

For myself, I often use PNF during my strength work between sets. I find when the muscle fatigues it tightens and can change my form between sets... I'll PNF myself to ensure this doesn't happen and have seen some great progress with it.

The material presented in these videos is included in the content that will be presented at Crossfit Lineage on April 25th.
The seminar is: Better Crossfit: Movement, Mobility, and Maintenance

The seminar at Crossfit Santacruz on March 14th is: Training the Injured Athlete which is really geared toward working coaches and programming for the injured/chronic athlete.

Kelly,
You are an A+ communicator dude. I have to stand in front of people and deliver significant content every week and I learn a lot from watching you connect with your audience and owning the room. Great job.

So my little brain is spinning?
Couldn't/how would we use PNF to help achieve nice high elbows in the front rack position?

As it happens Kelly has been posting a series of stretching articles on the CF San Francisco blog.

Not quite the same as the others.
http://sanfranciscoCrossFit.blogspot.com/2009/01/end-range-deranged.html

Is it necessary/recommended when releasing from the 5 sec. hold to decrease the stretch as shown, and then increase it afterwards?

Dude, thanks for posting those links! Kelly is so awesome that I learn tons just from his little blurbs on that SFCF blog.

One question though, when doing the couch quad stretch, does anyone know of a good way to actively contract the quad? When I PNF my own hammies, it is easy to find a table or something so that I can push my heel down and get the activation. Not sure how to get that with my quads. I would love to hear ideas on this.

I've been posting links to those articles all offer the place. They're an incredibly useful resource. And funny too.

For the couch quad stretch, I just push my shin against the back of the couch.

Something just occurred to me. If the muscles are weaker in the new ROM, which is why your nerves change the ROM, would it not be benificial to work JUST that ROM when you get it after PNF stretching? (E.g., do the stretching, then hold the low-position of a squat until you get tired, martial artists call it horse stance, and come out of it, thus strengthening it.)

why can't you stretch you hamstrings with the standing toe touch method, with an extended spine with bent and straight knees

When doing the stretch while sitting down, does it matter if the low back is in lumbar extension? Or as long as the hamstring is pulled hard, that's all that matters?

Coming more from a conceptual side, I would like to know why the term "lengthening muscles" comes up so often, although it is obvious that the muscle is long enough (and does not really experience a chronicle shortening).

I'm having real difficulty doing this with myself. I can use a stretching strap just like demonstrated, but I cannot get a significant change in the reflex.

For those of us who workout alone, should I use an elastized stretching band, or a static band? Basically, rubber band or climbing webbing?

Guys to help remember when to stretch - you can set an alarm on my Ipod/IPhone.


Also with the Ipod app 'UltraTimer' or 'UltraTrainer' you can set up a PNF timer:


The alarms makes it VERY easy to remember to stretch during the day.


The PNF Timer takes all the guess work out of the PNF stretch.


These 2 things have helped me incorporate *a lot* more flexibility work into my daily routine.

Do we need to warm up before applying those techniques? My coaches used to tell me to warm up at least 5-10 mins before doing static stretches. I'm confused now because it looks like a static stretch but it is a “non-stretching” technique hehe.