CrossFit Kids: The Games and Competition

Jeff Martin talks about kids participating in the CrossFit Games and in CrossFit in general. Jeff and his wife Mikki run CrossFit Kids.

Kallista Pappas received the most notoriety for her performance in the Finals. Jeff talks about her incredible competitive spirit combined with her lack of fear and commitment to great mechanics. And she wasn’t the only one. There were several teenagers competing against, and beating, adults.

Jeff also talks about how CrossFit workouts are not safe and easy. They are a challenge that push kids to their limits. Something, he believes, that is generally missing from many kids’ lives. 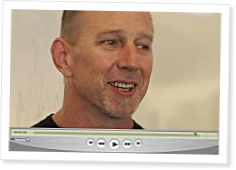 Jeff Martin talks about the challenges of working with teenagers, and the changes that happen with growth spurts. Jeff and his wife Mikki run CrossFit Kids. In growth spurts, the… Continue Reading

Many kids squat better than their parents because they haven’t picked up 20 years of bad habits and tight muscles earned sitting behind a desk eight hours a day.

Teaching the Clean to Kids

Jeff Martin shows his progression for teaching young kids how to deadlift. Jeff and his wife Mikki run CrossFit Kids. He explains why barbells are less important for kids, how… Continue Reading

At a Level 1 Cert, trainers break the med-ball clean down into five easily digestible steps. When training kids, you have to break things down even further.

9 Comments on “CrossFit Kids: The Games and Competition”

Jeff you continue to inspire through the skills you are teaching kids. I cannot wait for the cert this weekend.

Great interview and awesome points. Your words are spot on, we need more toughness in today's kids. Mental and Physical.

I also just wanted to give props to a local kid that participated last year. At the time he was a sophomore, 135lbs and competed with the big boys. He is now a junior, level 1 cert and ramping up to making a showing another day. BTW, his name is Phil Weigel, Kent, Ohio.

His brother also competed as a senior in hs, level 1 and finished 65th, not bad for a 18yo. He is training hard and will be back this year, representing the Ohio area again.

Props to all of the young CF's out there, each and everyone of you rock

I'm glad some of Jeff's passion for CrossFit and his work with the kids gets to show through here. He really believes in the value of the CF Kids program and pushes himself way too hard to make it a success.

You look a bit tired Jeff. Go have some fun with that pretty wife of yours that doesn't involve lifting heavy stuff.

He doesn't look tired. He looks affected. As am I. Well said, Jeff. So proud to be working alongside you. So proud of our CrossFit Kids!

I am still a big fan of adding "Kallista" to our list of benchmark WODs - 30 x body weight C&Js for time. That video gets at me everytime I watch it. I would want nothing more of my Soldiers, or my daughters, than to have the heart of that youg lady.

Watch the fist 3 seconds of the clip and Mr. Martin's reaction to the question. His attention is taken away from the camera for a second, but as soon as he hears the question his attention snaps back to the camera. He has a wide-eyed surprised look on his face.

You can see in his face how the question, the retelling of the experience, and thereby the experience itself affected him. He looks emotionally moved by it. I know I was and I wasn’t even there, much less 10ft away. I don’t know if Mr. Martin is tired or not (unfortunately I don’t know the man), but I can tell he is passionate about what he is doing, and we are all the better for it.

I have the same reaction every time I watch Kallista's video. It reminds me of Connor Martin's Deadlift/Burpee Games WOD as well. Connor was on rep 5 in set 5 of DL; up it came, agonizingly slow but up none the less. And he dropped it. The look of agony on the faces of his folks, Jeff and Mikki, was just painful to observe. The look on Connor's face, however, was as inspirational as Kallista's air squats as she prepared to resume her C&J. Equal parts digust and disdain on his face, Connor bent over and pulled #6, place it down, and flopped into Burpee #1. Powerful and inspirational.

I wrote on the Main Page at the time that it is possible for adults to have children who are Heroes. What inspriational stewards of these young athletes we have in the folks at CFK HQ. I'm really enjoying this series.

Everyone pretty much summed it up. The man knows what he's doing. He loves it and you can tell. He and the others at CFKHQ are doing something amazing for our future. Thanks guys. It's an honor to see what you do on a daily basis.

Great video! Just makes me want to go door-to-door asking parents- why isn't your child doing CrossFit Kids? Do you know how much good it will do for them?

How different the world would be if every child had the opportunity to learn these values.