Ricky finished in 6th place overall at the 2008 CrossFit Games. Ricky’s background in fitness is extensive. He has a B.S. in Ex. Sci from the University of Nebraska at Omaha. He is certified Level 1 CrossFit, CrossFit Run-Endurance, USA Weightlifting Coach and NSCA-CSCS.

He has been wrestling since he was 6. He was a champion wrestler himself, and has helped the University of Nebraska at Omaha win three national wrestling championships using CrossFit principles.

He also gave tips on how he runs his affiliate.

The next show will be Friday, March 27th, 2009 at 6pm PDT. The interview will be John Welbourn of CrossFit Balboa and CrossFit Football. 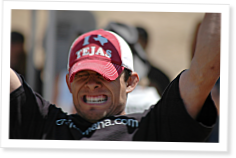 This is the 17th episode of CrossFit Radio, which aired at 6pm PST on January 7th, 2009. This is the second show of the new format. They are now doing three shows a week… Continue Reading

Ariana Grassi is a… Continue Reading

Shouldn't this be an audio file and not PDF? Regardless, I'm not able to download anything. Thanks in advance to whoever fixes this up.

absolutely loved this interview. Great to hear Ricky's thoughts on WOD's and how he tries to not program anything longer than 20 minutes. I agree with him completely and feel a strength bias goes a long way (in crossfit and in life).

I had the great pleasure to meet Ricky and visit with him at the Games and you'll never meet a more gracious, enjoyable young man. It was awesome to see him rocking the house. Looking forward to hearing this one, Neil. Paul

Completely agree with Ricky and Ryan. Anything too long and intensity is almost certainly falling off the table. And from what I've experienced, hanging out in the phosphagen/glycolytic transfers much better to the aerobic pathway than vice versa.

Ricky was a great interview. Of course, they all are, but this one went way off track. Usually when I prepare for an interview I will do several days of research. I read as much as I can about our guest and watch whatever videos are out there. Sometimes I even call around to people who know our guest and ask about them. As I do this, I write down questions that I have, or that I hope you will have. I do my best to ask all of these questions.

Going into Ricky's interview I had 3 pages of questions. Of the 50, or so, questions I had on paper, I asked about 12 of them. He just piqued my curiosity with training and programming and the damn interview went its on way. In a GOOD way. You'll even hear me at the end of the show fumbling for the agenda, so I could close the show. At some point, I had just chucked the papers into a pile and simply had a conversation Ricky.

The dude is awesome, succinct, deliberate and bold. His results speak for themselves. I caught a lot of suggestions from him on programming that I will incorporate into my own training. It's time that I begin to go heavier and harder.

His suggestions on running an affiliate are a good listen. I have been asking a lot of questions on how to run an affiliate lately. It occurs to me that most of us are passionate about fitness enough that making a living or a little extra on the side doing something we love might be something we might consider doing if we felt we had enough info. Hoping that hearing from successful affiliate owners will provide some of that info and maybe be enough to help you pull the trigger.

Thanks for the talk Ricky.