CrossFit&#8217;s Right on Target by Dave Re - CrossFit Journal

Dave Re was awarded title of Grand Master by the US Practical Shooting Association in September, 2007. It is their highest classification, but it didn’t mean that he was capable of winning major matches.

At 212 pounds, I was simply too slow to get off enough shots in a game that scored on quality and quantity. But I had hope that I could turn around that weakness in my game due to something I’d started a month earlier: CrossFit.

Most people might not think that fitness would have anything to do with accurately aiming and firing a handgun, but then they probably don’t know anything about the sport of Practical Shooting. Originally developed by Marine Lt. Colonel Jeff Cooper, a World War II and Korean War veteran considered to be one of the 20th century’s foremost experts on the use and history of small arms, Practical Shooting started as a way to give shooters a venue on which to practice and develop self-defense skills. Today, it has evolved into the “X Game” of the shooting sports—a contest of speed, accuracy, and power.

While I avoid discussing tactical issues, I think cops and soldiers will find that, when it comes to the mechanics of shooting and the physical challenges associated with operating a firearm at high speed in a stressful situation, our spheres of operation have quite a bit of overlap. Shooting is shooting. And whether you do it for sport or for life-and-death, I discovered that CrossFit can help you do it better. 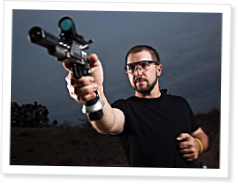 “I am a competitive bodybuilder. Marathon workouts of each body part, attacking every muscle with 30-40 sets. Three hours of aerobic activity each day. Manipulate water and sodium until I was ripped out… Continue Reading

Rob Orlando is a CrossFitter and strongman competitor, so he’s the first to tell you an 800-lb. deadlift doesn’t mean much if you can’t do pull-ups or double-unders.

Orlando is the owner… Continue Reading

On Episode 121 of CrossFit Radio, Host Justin Judkins interviewed Tony Blauer and the winner of the North Central Regional, Matt Chan. The episode was webcast live at 6 p.m… Continue Reading

10 Comments on “CrossFit’s Right on Target”

Dave,
Great article man. See you in class tonight to find out how this weekends competition went down!

Excellent article Dave! Oh and congratulations on your win at DTC - that was awesome considering the conditions that we were subjected to. I'm still trying to recover today...

Well written and interesting article. Congratulations on all the successes you've had this year. JJ CrossFit Central

Thanks for the good vibes, y'all.

Yeah, Rhonda, the finish at DTC was my highest finish at a major to date. I'm not really considering that a "win" - there was one guy ahead of me, who got High Over All. But, I shot a consistent match, generally on the pace, and with a lot of points. Two more stage wins, to boot. Definitely the best performance I've put in, so far.

I'm looking forward to the Space City Challenge in April, to see if I can't improve on that record a bit!

Dave, Awesome story, congrats and welcome to the CF pool. Never would have imagined that CF could help a 'practical shooter.' I wish you well throughout 2009. Paul

Nice article. At many matches and training classes I've observed that there are more than a few shooters who should lose 50 pounds before they worry about shooting another 50 rounds.

Great Article Dave. I find a lot of similarities between the attitudes of USPSA shooters and Crossfitters:


1) A willingness to ignore dogma and embrace new ideas (Weaver vs. Mod. Isosceles, LSD vs. Tabata-style)
2) An emphasis on measurability of performance (USPSA Classification, Crossfit Athletic skill level)
3) Pursing broad and diverse skillset vs. one attribute (Compare USPSA and Crossfit to Bullseye and Powerlifting)
4) A lack of tolerance for "Internet Tough Guys", aka forum trolls who claim that "x, y, and z are the end all and be all of such and such discipline" yet can't or won't back it up at the range or gym.


Hope to see more CrossFitters at my local club matches.

Just to update... Clinched my first major match win this past weekend at the New Mexico Sectional match near Albuquerque!!! My level of fitness was quite key in that win, as it turns out. Foot speed and ability to cope with odd positions gracefully made the difference, and allowed me to pick up about 30 match points on the last three stages to come from behind and pull it out.

Richard, you're spot on. :) There's also a cool parallel between the benchmark CrossFit workouts and the USPSA Classification stages. Talking about a Fran time is pretty analogous to talking about your El Presidente time, for instance.

CrossFit is rapidly becoming the fitness program for practical shooting. I know a number of shooters who've started CF in the past year - some based on my experience, and others through other mechanisms (exposure to LEO/Mil folks, etc). One thing I know about the high achievers in the practical shooting sports is that they seek out what works (abandoning traditional dogma for empirical progress). And, if that's what it really comes down to, CrossFit is the shit. ;) Not that I need to tell this audience that....

FWIW... picked up my first major match win this season, back in September, at the New Mexico Section match. Good stuff :) You can see from the video that my foot speed and stability have increased quite a bit: http://www.youtube.com/watch?v=e3ZiuXKUl_E

And I'm still seeing the gains from integrating CrossFit into my training package!