Midline Stabilization Part 8: The Muscles of the Pelvis by Kelly Starrett - CrossFit Journal

Midline Stabilization Part 8: The Muscles of the Pelvis

There are several two-joint muscles that affect midline stability. Understanding the roles of these muscles helps in diagnosing common flaws. In this episode, Kelly talks primarily about the quadraceps and hamstrings, the main two-joint muscles of the pelvis. He also addresses the relationship between head position and hamstring flexibility.

This is the eighth of a series from Kelly on the theory and practice of stabilizing the midline in functional movement. 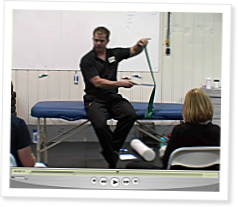 The Functioning Shoulder (Parts 1 and 2)

Midline stabilization is essential for effective functional movement. Kelly Starrett, of San Francisco CrossFit, explains the essential anatomy and physiology of it in… Continue Reading

In CrossFit and in life, we go overhead. Kelly Starrett, of San Francisco CrossFit, explains the essential anatomy and physiology of the shoulder in this excerpt from his one day… Continue Reading

11 Comments on “Midline Stabilization Part 8: The Muscles of the Pelvis”

As a very geeky trainer I am really enjoynig this series. I can't get enough of the more technical side of the art of coaching. Kelly you are a very effective communicator! I hope to see more of this and the cert regarding injury/rehab.

I look forward to attending one soon, but 1st things 1st. Level one in two weeks! I'm pumped!

Thanks Kelly, for your contributions here!

As a geeky non-trainer--and athlete with really tight hamstrings that are my nemesis--I also am enjoying this series and learning a lot. Thanks, Kelly, and I hope to see more like this!

You finally answered a question/problem that I am having. When I squat under load it is killing me where my quad meets my pelvis/hip flexors. I thought I was the only one with this problem.

It only hurts when I go parallel and below. I don't have pain with squats that are not as deep or done on the smith machine. I also don't have pain with running, leg presses, or body weight tabata style squatting. I thought I had good squatting form, but I guess I don't. I've been hurting for three weeks since my last heavy back squat day. I've had to use the smith machine since then and not go below parallel.

If you have anything to add on this topic I would love to hear more.
Great video series.
Thanks,
Mike B

KELLY!! you are reading the minds of crossfitters every where!! I wanted to ask you about hip pain when they posted your first video!
Different from Mike above, I get pain doing ANY squat esp tabata, and i only have the pain on the UP from about the quarter squat postion through fully standing (make sense?). its been killing me... could this be the same thing that you mentioned??
I know you can't diagnose via blob but I've asked PTs and i got a classic DONT SQUAT response. RRRR
You're lectures are awesome, I'm so glad they are posting them... maybe you will hop onto a traveling circuit :)
Thanks,
Danielle

These videos are AWESOME! I am a former college athlete who used to squat 400+, but in 2006 I busted my femur in a wakeboarding accident and my strength basically went to ZERO. I had a rod inserted through my hip and also had a fasciotomy on the outer portion of my quad to relieve the swelling (I’ve got some pretty gruesome pictures). Since then I’ve been struggling to regain normalcy. Your videos have given me some great insight and I’ve seen remarkable progress in the past couple months.

I’m in the Air Force and currently live near Sacramento with my family (My wife and I have a two year old little boy with baby boy #2 on the way). They are my driving motivation to get myself back into the shape I used to be in. I want to be able to keep up with them as they grow.

I just wanted to thank you and say please keep the videos coming. Someday I’ll get down to San Francisco CrossFit and check things out and maybe do a WOD with you all. Keep up the great work!

this series has been great,i now realise how much my tight hamstrings are affecting my performance in nearly all of the wods,have been doing pnf to lengthen them, but still a long way to go !
thanks Kelly,

What treatment do you recommend for the pelvis/hip flexor pain that you describe? I have heard that stretching the quad (traditionally grabbing your ankle) is of some benefit.

Any advice would be greatly appreciated. Thank you.

Since this seminar hasn't found its way to the east coast, maybe there would b a way to tape ital, and sell it to those far away......just a thought.....great work.......jb

I love Kelly's Videos - They have a lot of good info. He was not at my L1 cert in OH - what do we need to do to get him to give a lecture in the midwest?

I saw the PNF video for the Hamies - what about Quads, can we use the PNF approach for the quads too?

And another article from Kelly to add tot eh collection, assuming my first comment makes it through.
http://sanfranciscocrossfit.blogspot.com/2009/03/stretch-your-psoas-peoples.html

Love your videos, they're very informative and easy to understand. I have a question related to the hip flexors during the squat. When I approach the bottom position, I am feeling a pinch in my hip flexor area,my stance is shoulder width, my knees are out, my toes are pointed about 30 degrees, my back is in good vertical position. I was hoping you can shed some light on why this happens. Pushing my knees and toes out wider seems to alievate the problem but I dont find it functional to my sport (basketball) to squat with such a wide stance