The Jolie Diaries: Correcting the Press

In this clip from Jordan Gravatt of CrossFit by Overload, Jolie teaches the press to a small group of Level 1 participants at the CrossFit certification seminar at CrossFit San Diego on Saturday, February 28, 2009.

The press is taught in the L1 certs as a skill transfer exercise for the push press and the push jerk, which are much more powerful and functional movements. The techniques shown are thus more relevant to building success in the jerk than they are in maximizing one’s standing press, say for the CrossFit Total. In order to maximize a one rep max on the press, a wider stance and slight horizontal hip whip can be very effective. These two practices, though, are counterproductive for the push press and jerk. 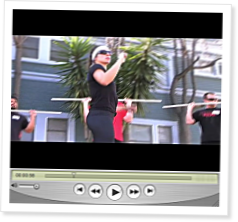 In this clip from… Continue Reading

The Level 2 Cert: A Simulated Test 1

This is Part 1 of the second episode of the Boz and Todd Experience. Boz and Todd, with special guest Chris Spealler, conducted four training sessions at Front Range CrossFit. Except for… Continue Reading

7 Comments on “The Jolie Diaries: Correcting the Press”

Nice work Jolie. As to the "horizontal hip whip" utilized in the CFT max shoulder press, is that to be done with knees locked or with "no dip" in the knee? e.g. remember the video with Freddie Camacho vs (somebody) maxing out on shoulder press, but then you see a slow motion clip of Freddy's knees bending? (Sorry to pick on you Freddie, but it's the only example coming to mind.) I assume it makes no difference if the body's center of mass remains stationary for the duration of the lift. Thoughts?

Jolie is teaching the press here, not the push press. In the strict press, no bending of the knee is allowed. Once you bend the knees, you initiate the dip, which is the first step of the push press (leading into the drive). The video you are referring to shows Freddy going up against Tony Budding and you are correct, his knees do bend slightly with the heaviest load. That knee bend (dip) you see technically invalidates the movement as a shoulder press and becomes a push press.

Jeremy is right, the knees do not bend during the press.

There was a video of Rip teaching a guy the press with the hip movement. I am pretty sure I saw it on the main site under the WOD a while ago.

CrossFit teaches two ways of pressing, and I am a little perplexed as to why.

I learned the way shown in this video at my L1 cert, but learned differently at the Barbell Cert with Coach Rippetoe. In Rip's class, we learned to lean the upper body back a little to clear the face; but here Jolie teaches to "lock down" the thoracic area and move only the head back and forth...

In both cases, the goal is to keep the bar path as vertical as possible, and both methods achieve this.

Does the difference lie in whether one is doing a heavy, strict Press (Rip's method) versus teaching the skill transfer in moving from Press to Push Press to Push Jerk (Jolie's method)?

Bill Starr's article 'Overhead is Rising' posted in November also said to lean slightly backwards when performing the press then drive underneath to keep your face out of the path of the bar.
Would be helpful if someone could shed some light on the two ways and if one is preferred?

Locking down the thoracic area as Jolie suggest and the tilt at the waist that Starr/Rip teach are not opposing ideas. When executing the lean you need to maintain a rigid torso in order to transfer force effectively through your upper body.

The lean is somewhat of an advanced technique which is not necessarily require for the execution of a technically correct or efficient press. Much more important to the movement is the rigidity of the torso and locking down the thoracic region as Jolie describes. With that mastered, the lean can be added later in an athlete's development to allow putting more momentum on the bar at the initiation of the movement.

Think of it as teaching the Power Clean before the Squat Clean. The adding of the ballistic squat to an already complicated movement can add confusion and needlessly halt learning of the other components of the movement. Sometimes it is more simple to leave the squat out (and the deadlift portion for that matter) and teach the Hang Power Clean before adding more complexity.

Not to mention their stated reason for not teaching the lean to beginners: That it doesn't translate to the Push Press or the Jerk.

They use the press as a solid foundation from which to build those other lifts. By omitting the lean/whip, they make the transition to the more powerful movements more seamless.