The Gymnastics Cert Down Under: Transference by Jeff Tucker - CrossFit Journal

The Gymnastics Cert Down Under: Transference

This video from the CrossFit Again Faster crew is the second part of this series. Tucker talks about the role of gymnastics in the general capabilities of a CrossFitter.

Core strength developed in gymnastics applies to all functional movements, including the overhead squat. There are so many progressions that allow athletes of any level to work the fundamental gymnastics drills, creating physiological adaptations in strength, flexibility, stamina, coordination, accuracy, agility, and balance. The transference of these adaptations throughout all skill based movement is undeniable.

Gymnastics from a CrossFit perspective is competency in controlling your own body in three dimensional space. Like the Olympic lifts, they are worthy of a lifetime of study. 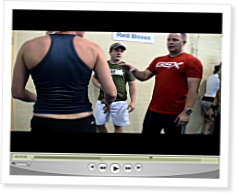 The crew from GSX Athletics continues their coaching session on pull-up-bar drills and techniques. This month, they look at some more rarefied powerful pull-up variations. They work mostly on dynos… Continue Reading

Jeff Tucker from GSX Athletics presents his muscle-up training progression. Jeff is the coach for the CrossFit Gymnastics certification seminar.

The first step is to have… Continue Reading

Gymnastics coach Jeff Tucker and assistant Jason Malutich take us through the importance of goal setting and progression in gymnastic movement.

They begin by emphasizing the importance of body… Continue Reading

i had the honor of doing the gym cert this last weekend with Tucker, the guy is a legend! this video is just a taste of his cert! the whole 18hrs is pretty much like this, learn something, practice practice practice