Dave Maxwell is a Major in the U.S. Army and he is doing as much as he can to get CrossFit better integrated into the Military. He is refers to himself as an Affiliate Coordinator rather than an owner. He has recently helped start an affiliate at Fort Leavenworth, which is his second military affiliate.

Major Maxwell first helped establish the affiliate at West Point. He explains the process of starting an affiliate on a military base. He has learned successful techniques when dealing with the upper brass, and shares his experience. 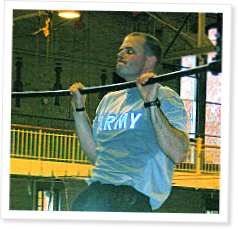 Dave--
Spot on man! Thanks for the shout out. Awesome interview! You said it right. CV told DB and I this morning that you were on CF radio. We were out at Bucknam for Sandhurst. We were selling our new B&G CF shirts. They were selling pretty good. Awesome job down there. Wish you could be up here for the new room. We are excited as hell. We have the Cert next weekend so momentum continues to pick up.
SB

Great idea selling the affiliate shirts at the Sandhurst Competition. That is a technique other military affiliates could use to raise some funds. Get about 20-30 Soldiers (Marines, Sailors, Airmen, etc) to wear their affiliate shirts during a 5K race. They have them all the time on posts this time of year. With about 30 folks running around in the same shirt, people will definately take notice. They usually have vendor booths set up, so it would be easy enough!

Great stuff Dave--I love hearing about the journeys of other military affiliates. CrossFit Ramstein is nearing it's one year anniversary; it truly is amazing how far we've come in just one short year! Shoot me an e-mail sometime...I would love to pick your brain (and you can pick mine...my brain, not my nose). I would love to do a journal article on the the success of our military affiliates...perhaps we could make it a dual-project.

I am the newly appointed editor-in-chief of The CrossFit Journal. We would be very interested in hearing from military affiliates about overcoming obstacles on the way to successful implementations of CrossFit. We are now in early phase research for a major article. We'll even get someone else to do the writing!

The plan is to "put it all together" by focusing on best practices and lessons learned. Send the top three takeaways from your experience in a brief email to daniel@crossfit.com -- and we'll take it from there.

Hey guys, there is another military affiliate at Fort hood - Centurion CrossFit http://crossfitforthood.blogspot.com/. We were the first affiliate there and are the only one that is open to everyone. We are in well with MWR here and they have purchased $10,000.00 worth of kit for our box.

One of our most successful endeavors is going to units, giving them a few hours of classroom instruction covering CrossFit and its principles and then teaching them the 9 fundamental movements over a 4 day period during their PT time. The requests for this are continuing to grow and it's our most effective way of getting CrossFit to the Army masses and improving the combat fitness of our Soldiers.

I'd be very happy to help with the article as we have had great success in getting MWR to support us and the program and have made good inroads with some of the units here.

Thank you Neil & JJ for getting Maj. Maxwell on the show to discuss his journey on setting up a Military Affiliate. It has given me even more encouragement to put together a presentation to give to my CO on the positives that would be gain from setting up a Military Affiliate at work, and getting away from the standard Army training system which only produce's partitioned results.

I've been crossfitting since October last year and on the Zone, mind you a loose Zone, but i have lost 15kg's(33lbs) and have a new found energy for training, especially Crossfit. I've even taken to occasionally doing a WOD prior to a work PT session since the work session are more of a warm-up than a workout, but last 2 to 3 times as long as the WOD did....

Can't wait for that article Daniel, will be very intersted to get a good insight into a Military Affiliate and issue's.

Thank you for the interview with Major Maxwell. Listening to it has definitely given me renewed motivation towards setting up a Military Affiliate at the Coast Guard Academy. Hearing about what is going at West Point is awesome, and a huge congrats to Maj. Maxwell for being a catalyst for change.

As far as issues go, our only one has been in getting approval through the command. We started the process in February after I attended a Lvl 1 Cert, and the approval from CrossFit HQ was quick and encouraging. Full of zeal, we went to the command for approval, and while we haven't heard "No", we have yet to hear anything . . . .

In general discussions around the Academy, there is widespread support including Company Commanders and athletic coaches. I realize our next step is to take Maj. Maxwell's advice and develop a cadet-oriented program, and we'll see where we go from there.

If anyone has any suggestions towards developing a Military Approval or getting command approval, please feel free to contact me. This stuff saves lives and makes our military stronger!

First, I have been overwhelmed with the response to the interview, and have gotten a ton of emails. I ma trying to get through them, but I tell you that everyone from 1SGs to CPTs are hitting me up.

Second, the commander of the 82nd Airborne Division visited West Point and was very impressed with what is going on there. HE was talking about instituting it throughout the entire division. That in itself would make me want to go to Bragg. For those of you that know anything about tankers, that is sacrilidge.

Paul- thanks for the props....hard to get on the main board lately.....

Daniel Freedman - anything you need!