As the winner of last year's CrossFit Games, Jason Khalipa, is known as the Fittest Man on Earth. Jason also owns CrossFit Santa Clara. Jason talked about what he has been doing the past year, how he has been growing his business, planning for his upcoming wedding, and prepping for this year’s Games.

The Fittest Man on Earth talked about his affiliate. He explained how his business has grown to the point that he had to move into a larger space. He recently went to a CrossFit Kids cert, and hopes to incorporate that into his affiliate's schedule. Jason described his marketing methods, and the programming for his box. He defended his position against the rumor that he does the WOD in each of his five classes daily. 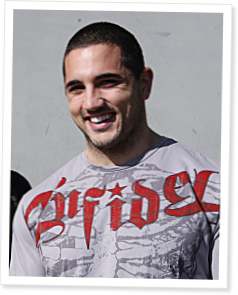 Jenni Orr is a Level 2 Trainer and is on the training staff for HQ. She… Continue Reading

HOLY CRAPOLA! I have to agree with Neil and J.J on the PPM stuff. Saw the vid's. Horrid this worst pull ups and explanation of knee rotation I have ever seen. How does that jerk off even sleep at night.

It's honestly freaking drives me up a wall that people will buy into this utter circus bull crap and think it's some how going to improve their abilities.

Big shout out to Big K. Best of luck in the games hope to go there myself in July as a spectator.

I honestly hope coach puts in a swim wod. I WILL RAPE ALL! j/k

I went through the checkout process...

thats the link for my swimmer's mouthguard...$2000 bucks...for a professional. i think i rather invest my money on some more cert's....

I'm not so quick to poo-poo the mouthgard thingy. It may or may not be a legitimate product, I don't know. I do know that the position of the mandible influences the position of the head. Since the head is connected to the rest of the body there must be other postural accommodations as well. I'm not making this stuff up - dentists use it to treat TMJ pain as an alternative to surgery. A crossfitter with means should get fitted for one and see if their Fran time improves.

thats some funny S$%T, i had to watch the video's that you guys played during the pod cast, they were some vey crappy 'pull ups' if that what they could be called.....