Instead of max reps in one minute at each station, they had to complete 20 reps at each station for time. Officially, the workout was three rounds for time of:

Jimi finishes in 13:56 (including the rest periods). This is a 300 point FGB, but in less than 14min instead of the standard 17min. What kind of difference does that make for two athletes who are used to scoring in the high 300s? After the workout, the athletes sprawl on the floor and discuss their strategy and performance with Tony Budding. 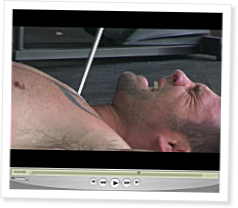 There are 25 comments on this article. Login to add your own.

In this new series, HQ trainer Pat Sherwood is searching the CrossFit community for real people with real stories to share. In Part 5, Sherwood is back in Denver and accompanies … Continue Reading

Jimi's a monster,and I like to think I push myself hard all day, but wo him there It woulda never been that quick............Thanks alot for the wko bro, and for runnin our athletes through that day,they learned alot........jb

I appreciate having my coach on record admitting that the directive "take two breaths" is, indeed, as ludicrous as it sounds. Rest assured that'll come up in a future POD. Crazy great work - both of you.

And as Josh said, Jimi, we dug the training session. I've never done such a good burpee, and really like the new structure that's been incorporated into our daily warmup as a result. Thanks again.

I did the regular FGB today and scored 314. It is really motivating and informative to watch you guys storm through a 300 score so much faster than me. I need to make more reps on push press, which I find difficult because I am so exhausted by the time I get there on rounds 2 and 3. Watching you guys rep out 10 presses faster than I unrack the bar shows me than I can make up some reps there. SDHPs on rounds 2 and 3 also looked really fast. Nice work.

This vid begs the question, how do you plan your wod?
Do you go all out until you can't go any further, having to catch your breath while the clock continues to run? OR
Do you do a certain number of reps, before taking a quick breath, knowing that you probably could do a couple of more reps? OR
Do you take a couple of extra breaths before starting the next round or next movement, so you can bust through the entire set of the next movement coming up?
I don't think that there is one right answer, as each wod has it's own evilness to it, just as we have our own strengths. I've done all 3 at various times for various wods, so I can't say. I take each wod on a case by case basis, and also go off of how I feel. The most important thing, I think, is to listen to your body and know where you are while in the wod. Good luck.
3...2...1...GO!

Great vid!!! I like this look at Fight Gone Bad. I tip my hat to the person who pulled out the Danzig tune for the vid, the song fits well with that wod lol!!

I love how this video captures the essence that crossfit training is continuously evolving. Just like with the implementing of chest2bar, this minor tweak changes everything.

FGB is a unique CrossFit workout in that you can improve your score without necessarily improving your power output but rather tweaking your strategy. You can score better without necessarily being a better athlete from session to session by modifying your approach.

Changing up that dynamic shows just how much that is the case, even if we don't consciously strategize. Props to both of you for the great work and the unique approach.

Great video. It's amazing to see how changing the priority of the workout could make two amazing athletes collapse to the ground. I also found the psychological aspect of this change up interesting... Josh always feeling like he was behind and Jimi wondering if he was losing ground. That's something you don't really deal with in a typical FGB. Great work both of you. And I agree with Kara... the change in our warm up routines at PCF since that day really has improved our workouts, so thank you!

It's a rare video that imparts upon viewing the same discomfort that you feel when you're doing the workout. Jumping off the box just looked damned painful towards the end. Nice workout fellas!

I gave that WOD a shot today at CrossFit Northern Kentucky. They're right about gaming FGB. I do it every time, plotting out how many points I need to get each minute in order to reach a certain score. There was no gaming this. 20 reps every time, like it or not. What is amazing, though is that every 20 cal row was under a minute, which is very unusual for me.

I met Jimi out in Las Vegas and he's just a heckuva guy.

damn! and at least another 12 expletives! my question is what do you guys eat & drink following that workout/competition to help recover? thanks for the input... BigMike

Man I would have thought some of the push press video was sped up if you didn't have the other athlete in frame for comparison. Holy crap, props to both guys.

Typically following a wko like this I would eat 6oz sweet potato with about 50 raisens and a 40 gram whey protien shake, assuming the main goal was ultimate recovery. If the goal was more about aestetics I would remove the shake, and raisens, and cut the sweet potato down, and dd it to a real food meal with eggs or chicken.......hopethat helps a little bro...jb

excellent! thanks for the feedback Josh!

as rx'd - 10:16, not including rest.
optimumperformancetraining.blogspot.com
check it out...

Can i ask a form question? when i did my cert with Greg in 2005 the form requirement was that, on the box jump, the whole of both feet had to land on the box and you had to stand to full extention.

Can we now use a partial foot contact with the box. great if we can as its what i always want to do and it would up my cycle time

Could you please share the details of your new warm-up. Thank you.

This is just sick! This is what I love about Crossfit, always pushing the limits and doing stuff different. Talk about motivating. Next time FGB is the WOD we are going to give this a try.

Does the rest time count?

Did this WOD today with some of my colleagues on Fort Bragg. Time was 13m 16s including rest. I honestly think it is a little easier than fight gone Bad cause you only have to do 20 reps then move on, still painful though but i have a problem with not gaming the regular fight gone bad

Just wanted to check, were the times given of 11:56 for Jimi including rest? or is the somment at the top correct in saying it was a 13:56 including breaks?

Just wanted to check, were the times given of 11:56 for Jimi and 12:44 for Josh including rest? or is the time at the top in the blurb correct in saying it was a 13:56 including breaks. Just trying to figure it out and thought who better to ask than the guinea pigs.