Squatting Outside the Box by Russell Berger - CrossFit Journal

Squatting Outside the Box

Russell Berger attended the private seminar that Dave Tate of EliteFTS did at CrossFit San Diego on January 24, 2009.

What do you get when you give a stubborn kid with no friends, plenty of bullies, and learning disabilities access to a small, private powerlifting gym? That depends. In Dave Tate’s case, you get a 700-pound back squat before you’ve even graduated from high school. Decades later, Tate’s experience as a professional athlete and coach have turned that stubborn, bullied kid into a powerful motivational speaker, successful author, and the founder of Elite Fitness Systems, a multi-million dollar equipment supplier to strength coaches and athletes.

From the start, however, Tate made it abundantly clear that he wasn’t interested in CrossFit’s calling card, GPP, or “general physical preparedness.” He opened by acknowledging our differences, noting, “I can’t train for general fitness. I respect the shit out of anybody that can, but I want to break records; that’s just me.”

Most of Tate’s training involves improving a lifter’s ability to get out of the bottom of the squat. The box squat, as Tate showed us, is a unique method for teaching the instantaneous generation of force or “explosiveness” required to reverse the direction of a massive weight. Practicing exploding out of the bottom of the squat wasn’t new to me. Rip teaches this at his certification before even allowing anyone to touch a barbell. What was amazing then, was how profoundly inept I was at generating this force off of a box. 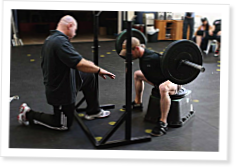 Nothing about this place was pretty, new, or comfortable. The interior was worn and… Continue Reading

Chris Mason offers a program designed for CrossFitters who want to improve their deadlifts without compromising overall fitness.

CrossFit and a big deadlift … .

Thus far, we have not seen too many… Continue Reading

“Tomorrow, I have no idea what I’ll be doing (in the gym),” Louie Simmons says during this special lecture.

He’s talking about the conjugate system, which has athletes constantly changing the… Continue Reading

15 Comments on “Squatting Outside the Box”

The bar positioning in the pictures seem to be placed lower on the back.
Why?

In the article is says,

"Doing more than four reps at 90% of your 1RM range during training, for example, won’t actually increase strength, but will seriously inhibit recovery speed."

This seems to contradict days where the prescribed workout is 1-1-1-1-1-1-1, just trying to make sense of what this means.

I'm always curious to see if this kind of form is simply better for powerlifting, or if it is a more funcitonal way to squat, because it seems like a very awkward way to squat if your didn't have any weight on.

I feel lik ethis is an example of training simply to lift higher weights, rather than lifting to improve the natural function of the body.......Anyways, I'm open to options!

I think Russell can clarify, but I don't think there is any contradiction here. In the article he also notes that if you reach your PR, quit. There's a great video lecture series by Dave Castro on CrossFit WOD programming (I'm sure you might be able to locate if author's names are searchable) in which he explains that the starting point on the 1-1-1-1-1-1-1 WODs should be pretty close to your PR.

It seems like the combination of these two theories either allows one to hit their PR in 4 reps or at least go the full 7 with some failures mixed in (which is generally how my notes look at the end of one of these sessions).

There are many ways to skin the 1-1-1-1-1-1-1 WODs. It's important to remember that the 90% advice Tate gives is geared towards some pretty elite level lifters- guys who are putting up weights pretty close to their maximum genetic potential, and with the occasional drug use, a little more. Compare this to the novice CF lifter, and that "90%" is going to represent very different things. Women in particular can lift extremely high percentages of their 1RM without much trouble. Rip goes over this in his cert. Basically women generally aren't as good at expressing maximal strength efforts, and therefore 7 singles at 90% for them might be a perfectly good strength workout.

As for the "walk away" rule after hitting a new PR- absolutely.

A few times I've hit plateaus in the squat. Twice I switched to box squats for a month, and both times my PRs shot up at the end.

Very well written/informative article Russell. Dave Tate really knows his stuff and there's definitely a lot we can learn from him. 10/10

I also tend to disagree with CrossFit programming when it comes to hitting PR's on max weight for 1-5 reps.

Once you are past the intermediate level on a lift, lifting too close to your 1RM can actually hurt your subsequent 1RM attempt.

Everyone is different, but when you are lifting non-trivial amounts of weight, going within 5% of your 1RM is going to hurt subsequent attempts. I warm up well, do one rep at 90-92% and then just go for it. I dislike the CrossFit rep scheme for lifts that I am well versed in. For beginners, those that do not strength train seriously, or for unfamiliar/weak lifts, those same rep schemes are effective.

Step 3: Touch the box slowly, allowing your weight to settle on it with absolute control. At this point, every muscle in your body must be tight, and you must continue to hold your breath tightly in the abdomen.

Step 4: Wait one or two seconds. At the moment the crease of the hip passes below the top of the patella (knee), immediately squeeze (contract) the posterior muscles violently and violently snap up from the box/bottom of the squat.

Russell, clarify if you would - these two directives seem to be in conflict. It seems to say descend to the box and stop. On the other hand, it says to explode upwards as soon as hip crease is below top of patella. ???

Russell, Given that my perception is that the weakest part of my squat is the bottom of my squat, any recommendation on doing so in the 'athletic squat' position or the 'powerlifter' squat position? IOW, any comments on transferability between the two applications? When you train athletes, do you use both versions? Thanks, Paul

If the descent to the box is sufficiently slow, and the box height is set up properly, the "moment" the crease of the hip passes below the top of the patella will actually be at the end of a slow "settling" of weight on the box...

In other words, go down slowly, touch the box, and once your weight is FULLY settled onto the box you will "Pop" up with a violent burst of energy.

and yes, the box squat seems to work regardless of the "style" squat you choose. I for one use Rip's style squat, and still use the box squat as a training tool.

Russell, could you comment a bit on bar positioning?
The videos/article talk about the torso being a little more upright, which would seem to follow suit with a high-bar squat.
I know that Rip encourages the low bar in order to get more hamstring involvement.
Any words on whether high bar or low bar is preferred when working these wide-stanced box squats?