The Early Days of CrossFit by Jim Baker - CrossFit Journal

The Early Days of CrossFit

Jimmy Baker started training with Greg Glassman in the late 90’s at Spa Fitness Center in Santa Cruz, CA. He is now one of owners of, and trainers at, CrossFit Santa Cruz Central.

Back then, as is common today, CrossFit didn’t fit well within a traditional globo-gym like Spa. Even thought the Glassmans were the most successful trainers in the gym, they were eventually kicked out for being incompatible. Unfortunately for the Glassmans, this was the last gym left in Santa Cruz for them. There was nowhere else to go.

What was unfortunate for the Glassmans became a turning point for CrossFit. The Glassmans ended up renting the corner of Claudio Franca’s Jiu-Jitsu studio. From there, they rented their own space on Research Park Drive, which became the original CrossFit gym.

Jimmy was a client throughout these transitions. He was also one of their first financial backers, offering his credit card to the Glassmans to help buy equipment.

This video is a little of Jimmy’s story of the early days of CrossFit. 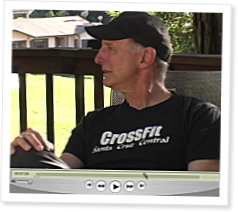 In a lighter discussion, Jim Baker, Mary Conover and Sally Stade, along with Tony Budding, talk about the term elderly, and give possible alternatives. Jim and Tony each received some… Continue Reading

In this multipart series, Andrew Bernstein, author of The Myth of Stress, presents to CrossFit athletes and coaches his process of dealing with stress.

In Part 7,the group analyzes a new… Continue Reading

Science and the Rest Day Discussions

For five weeks, Emily Beers obsessed about the CrossFit Games Open. She tied her self-worth to her performance. Then she went to Haiti. And things changed.

10 Comments on “The Early Days of CrossFit”

What an awesome video! I think it would be quite something to be able to sit with Jim and talk about the good old days. Loved the part about CrossFit as religion!

really great video, i feel the same way about crossfit.

Excellent insight into the beginnings of CrossFit and the struggles Coach faced starting from scratch. Much like most of the affiliates out there today. Maintain your vision and make it happen.

Tony and Jim, thanks for that. I love hearing about the old days, and appreciate Jim's insights. He said two things that I think connected, thought not sure if he meant them that way. He pointed out that Coach listed his not stellar qualities and pointed out how they set the context for a real admiration of Jim by Coach. Jim also commented on how much we all enjoy when we feel like we are accepted for who we are. I think there's a nugget there that is esential to CrossFit as it has grown. Everywhere I can see, Coach rewards and gives attention and focus to performance and excellence and exceptional ability, talent, grit and results. He has also created a group that has not developed a sense of elitism about those things. People bring what they can bring to the table, and they find a group that values what they have to offer.

In the main, egotists have no harbor in CF. How is that so? I don't think I've experienced anything like that in any other group in which I've been involved. My only guess is that looking around and seeing everyone in the community embracing serious pain in order to create a better life creates respect in a remarkable, unique way.

As I consider what must of necessity change and/or be lost about CF with growth, I also hope the humility element will remain integral. Paul

I really like seeing segments like this in the journal! In addition to more technical articles and videos, the athlete profiles and personal stories continue to reinforce what it means to be a part of the Crossfit community. Thanks!

As someone who found CrossFit about a year ago and is approaching 66, I always enjoy Jim Baker’s insights about training. This video about the early years of CrossFit is especially encouraging. It shows how someone who believes in himself, as coach does, and who is willing to help others by sharing what he knows while continually striving to learn more about his chosen field of expertise, can bring real change to people’s lives.

I also appreciated the comments about humility and a sense of community in CrossFit. Yes, there are a few out there who tend to be elitist or egotistical, but most of what I have experienced has been a true sense of community... of people caring about one another. I follow CrossFit mostly from the web, the daily WODs, and the Journal. When I tell others about this phenomenal resource they can’t believe it. I tell them the Journal is worth way more than the annual subscription cost. Where else can you find so much excellent information, in written, video, and audio formats, for so little.

Thanks for continuing to include videos like this one with Jim Baker. It has given me an even greater appreciation for CrossFit and for what the Glassman’s have given us.

Jim Baker is a class act. I am proud to have met Jimmy and his wife Debbie in Santa Cruz in 2004/2005. Great to hear his insights and perspective. Thank you.

Andrew I knew you'd be happy to see that shirt on Tony. You guys have a great thing going on down there from what I hear.

I had the chance to very briefly meet Jim last March at CFSCC when my brother-in-law and I visited from NC. At the time, I only knew of him as the guy doing cleans in the old videos shown during this interview. Between this interview and the others about Jim training Mary, I've developed a sense of awe at the way Jim truly understands his clients and the needs they have. I wish I had really known what kind of a person you were back when we met. Maybe someday I'll be able to tell you how your story has made me a better trainer as well.

Thanks Jim, Coach, and the CF community for everything you give to us.

Remarkable interview. Thank you, Jim, for your belief in Greg and Lauren when it would have been so easy not to believe. But, of course, that is not to say that your belief wasn't inspired by Greg and Lauren's passion for what they were doing and their fundamental faith in themselves and CrossFit.