In this clip from Jordan Gravatt of CrossFit by Overload, Jolie teaches the push jerk to a small group of Level 1 participants at the CrossFit certification seminar at CrossFit San Diego on Saturday, February 28, 2009.

The push jerk is one of the greatest movements known for developing general athleticism. It both demands and develops high levels of power, speed, strength, coordination, accuracy, agility, balance, and even flexibility. Jolie walks the participants through the CrossFit Level 1 progression for teaching the push jerk.

The progression is designed to introduce the movement to clients who are unfamiliar with it. Practicing with PVC is safe, but it is difficult to feel whether or not momentum is created on the bar. This downside is far outweighed by the high success rate of getting the majority of new athletes to move properly. 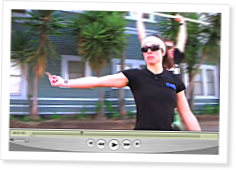 There are 12 comments on this article. Login to add your own.

The Jolie Diaries: Correcting the Press

The Level 2 Cert — Fixing the Dip

Box jumps are mainly about jumping onto a box. Simple, right? But like any CrossFit movement, you can always add a good dose of virtuosity for increased speed, efficiency and grace.

12 Comments on “The Jolie Diaries: Correcting the Push Jerk”

"Get to the point of deepest penetration" ...that cue is perfect for the guys! Love the pointers I get from these videos.

RATM was a nice touch!

Just a quick question. What is meant by opening up the hips? Thanks.

It means to stand up fully erect before you re-dip to catch the bar. Basically he is dipping, standing up a bit of the way, then re-dipping under. You have to fully extend the hips (like you would jumping from flat foot to in the air) or you are not getting full power. I have trouble with this.

That was a great training aid - at first, I could see the movement wasn't 'sharp', but by the end the lack of hip extension was clear to even my rusty eye.

Nice also to get a demo of how to deal with a student who's working hard, but just can't put it all together in a reasonable time for a group class.

Anyone who's going to a cert, particularly a Lv II, watch this often. Will be a big help, especially if you don't work with clients on PVC/barbell movements frequently. Paul

So its dip drive dip? Jump and land as you shoot your arms over head. The deep penetration is opening and closing of the hips. Quite a complicated move, but practice makes perfect.

Don't make it more complicated that it is......same as the snatch or the clean, the efficiency comes from the fully open hip.

You dip and drive. This gets a loaded bar moving up. Yes, you are opening the hip up, but what you are really doing is using your entire body - core to extremity - to get that bar moving up at far as it will go. Then, as you are going from the jump position to the land position, you are PUSHING yourself under the bar into that 1/4 squat dip position. Done correctly, in that split second, the bar is still travelling up, while you are travelling down. You'll land in the 1/4 squat, arms over head, stand and finish the lift.

Very helpful video. Jolie is so vibrant. Can you imagine what our schools would be like if teachers had her enthusisam?

Respectfully, I was disappointed in both this video and the push jerk video. The instruction on extending the hips was well done, but not one trainee had the bar anywhere close to the proper rack position on the shoulders. It's possible to get away with this using a PVC pipe, but the rack position shown in this video is as big power leak as failure to extend the hips. It's difficult for experienced weightlifters to get a near weightless PVC pipe racked correctly on the shoulders and - as this video series shows - nearly impossible for Level I seminar trainees. There needs to be SOME weight on the fingers to get the bar down to the shoulders. I think it is time for the Crossfit HQ seminar team to start teaching the push press/push jerk with something a bit heavier than an empty PVC pipe. I suggest that the certs start teaching the push press and push jerk using either lightweight barbells or PVC pipes filled with rebar or sand.

Never knew the push jerk could be so complicated.

Thanks, I needed that answered aswell.

That was awesome, great review thanks!!