01:40 Hillari Eaton is part of a growing trend: people relatively new to CrossFit taking top honors at Regional Qualifiers for The CrossFit Games. Hillari won the Great Basin Qualifier, held April 18 and 19 in Flagstaff, Arizona. Hillari has ben training at CrossFit 801 with Miranda Oldroyd only since August. Amid much laughter, Hillary described the three tough WODs she completed at the qualifiers. She also described her strategy and preparation and how competing at 7,000 feet above sea level affected her performance. Hillari concluded by confessing her dietary dirty secret: she just loves ice cream sandwiches.

21:28 Affiliate owners speak out on why they have signed up for the Risk Retention Group (RRG), a form of self-insurance that will safeguard CrossFit’s future.

22:56 Our focus on Regional Qualifiers continued in an interview with Jeff Tucker, the owner of GSX CrossFit. Jeff hosted the Hell’s Half Acre Qualifier this past weekend. Jeff described the emotion and intensity that were so much a part of the event. He also described the WODs and talked about the performances of the athletes. Jeff described an gymnastics station invention that he and his father created. They believe it is perfectly suited for CrossFit. Called the Iron Beam, it was unveiled it at the qualifiers to positive response. Jeff also conducts then Gymnastics Certs and outlined his busy travel schedule in the coming months.

41:12 The Insider Report focused on the changing face of CrossFit. More athletes from other sports and more medical professionals have been seen at certs in recent months. Finally, the Insider questioned the beverage choice of a certain trainer.

This episode was originally labeled episode 64. 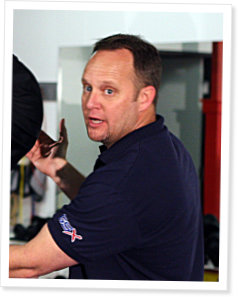 This is the fourth episode of CrossFit Radio that aired 8AM PDT on October 12th, 2008.

As the winner of last year's CrossFit Games, Jason Khalipa, is known as the… Continue Reading

Yet another great episode guys! I'm one of the 17 bastards that listens to the show every week. I love all of the updates from the games. Man I wish I could've registered for the rocky mountain one! Please get a link or pictures of the IRON BEAM, that thing sounds amazing.

Hey, what has happened to the weekday radio? Where are the editions?

Yes, where are the weekly shows?

Any one found any pics or links on the Iron beam thing its been two weeks and cant even find it on gsx or again faster??

Maybe it was too good to be true???

Looking for the Iron Beam as well. Nothing under google, Again Faster, or GSX Athletics. I thought that I might get a hint or something mentioning it coming soon but nothing...

Trying to find the Iron Beam. Searches are turning up nothing.