This episode features the first on-the-scene report from a CrossFit competition; the Northern California Qualifying Round of the 2009 CrossFit Games.

00:00 - 17:30 Pat Barber - on site for the Nor Cal Games Qualifier. This segment also includes an interview with the Men’s First-place finisher, Jeff Leonard.

17:30 - 19:35 CrossFit RRG - pre-recorded comments from CF Affiliate owners on the need for such a program, and their personal reasons for participating.

19:35 - 46:46 Dave interviews Steve Liberati from Steve’s Club in Camden, NJ. Steve updates the community on the progress of his CF program for under-privileged kids in his town, and what the help he has received from the CF community has meant to his kids.

The next CrossFit Radio Weekend Edition show airs live on Sunday, May 3rd, 2009, at 6PM PDT. It will feature more on-the-scene reports from Day 2 of the Nor Cal Qualifier with Pat Barber and Dave Millar. 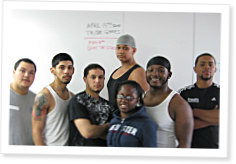