This episode featured coverage of The CrossFit Games Qualifiers. It included an on-the-scene report and a look at nutritional preparation.

00:00 - 13:47 Jason Ackerman, owner of CrossFit Albany was the lead organizer for the Northeast Qualifer. Jason said it was quite a scene in the parking lot of his affiliate, with 240 competitors and more than 500 spectators participating. Jason described two killer WODs, including a 2,000 meter row.

13:47 - 16:10 In a clip from a video, Brian MacKenzie of CrossFit Endurance talked about the importance of technique in developing running speed.

16:10 - 39:46 Dave focused on how diet can be tweaked for competitions like the qualifiers with nutrition expert Robb Wolf. Robb also discussed the importance of nutrition timing. He suggested that there may be a two hour post workout window when carbs can be increased and fats reduced. 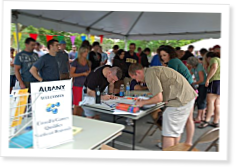 Just to clarify, that window of opportunity for PWO nutrition is best within about 15 min, still good at 30 min and about bak to baseline after an hour. Most definitely faster than 2hrs!