Tony Budding and Jimi Letchford of CrossFit HQ staff were invited to teach a group class at Practice CrossFit. Josh Bunch, the gym’s owner, described a number of his clients as good athletes who enjoy their comfort zone. He thought one area for them to work on was really pushing the intensity.

Since Jimi and Tony were guest instructors, they used the warmup as an opportunity both see how the athletes moved and to work on some core technique issues. They also taught the more complex movements of the workout.

Josh helps divide the class into teams. The workout was designed to maximize each athlete’s power output or intensity. How? Well, the reps were kept low enough that the athletes could move through very quickly. Then, plenty of rest was allowed, so they could hit it as hard as possible each time. Finally, given that it was a team workout with only one athlete working at a time, there was a lot of pressure to work hard for your team.

The workout was 7 burpees, 7 box jumps, and 7 hang squat cleans. Teams of three, with only one person working at a time. Everyone went through in order 7 times each. 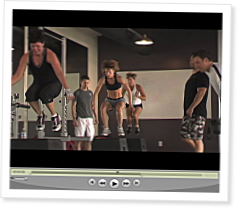 This episode is a full session with Kathie Weigandt, 64. Kathie is among the fittest of Jimmy’s clients, even though she’s only been training with him for four months… Continue Reading

This is Part 4 of the second episode of the Boz and Todd Experience. Boz and Todd, with special guest Chris Spealler, conducted four training sessions at Front Range CrossFit. Except… Continue Reading

This is Part 5 1/2 of the second episode of the Boz and Todd Experience. Boz and Todd, with special guest Chris Spealler, conducted four training sessions at Front Range CrossFit. Except… Continue Reading

Just wanted to say Thanks to Tony, Jimi, Jon, and Casey for comin out tearin up a class, and makin great vids all the way. Your team is stellar, and just yall bein here has improved ours greatly, so thanks again...jb

great video. I love the coaching points on these three the movements that people tend to "cheat" themselves of full range of motion on (i.e. how all three exercises also continaully re-emphasize the importance of opening up the hip). thanks.

Firmly agree with JB. Have never done such a good burpee and think about my form on those more consistently as a result. Additionally, as I think I may have noted in an earlier blog post on this wko, the intense warmup we did with Tony and Jimmy has become a much appreciated part of our daily WODs. Thanks to talented membership at PCF, formal after-wko stretching and yoga has also become available (as a trial) a couple days/month. Amazing the positive impact this end-to-end approach to a wko can have on your body's ability to handle the general soreness/tightness associated with daily WODs. Certainly that's key to effective long-term performance.
Thanks for the time and expertise. Really enjoyed the session.

The coaching on the individual movements was great as was the advice of going faster if you;re feeling ok after the set.

Since I train alone, would it be comparable to basically do 1 on 2 off and then do that for 7 rounds.. as if you had 2 others going right after you who worked just the same as your pace.. or even do it so that you had a little less rest than 2X your round to push your pace? Basically work one round for X time, then after 2 X go again.. for 7 rounds? This was just my idea since I train alone.. of course comradery is nice and what not, but the thing that I would really be missing is the other person's observation of your deteriorated form when you're pushing so hard... mental cues that could be thrown at you while you're just focusing on your movements and INTENSITY.. I love these kind of workouts.
By the way... what was the weights used for hte guys for the cleans?

The guys weight was 35lbs and girls was 25lb. As a modification I may do amrap 5 minutes then take a 3 min rest 5x. Or do the 7 rounds but take a 2 minute break every round, this way your rest wouldn't increase as it would with a partner who may b slowing down. Have at it..jb

Great Video. It truly is the trainer's challenge to find ways to ever increase the intensity level of our athletes. We also operate on the maxim that "people will die for points," and, "no one wants to let their teammate down." Short burst AMRAP duets with ample rest cycles work wonders, along with the trainer holding pen in hand at the white board asking for "number of rounds?" during the rest cycles almost assuredly guarantees maximal effort.

I love the focus on deadlift form and burpee/pullup ROM. I think we see a lot of times posted that are based on crappy rom. Also, thanks for the dead lifts cues. I often use a "push into the heels" cue, but wasn't really happy with it; however, together with the "knees back" cue is what I was looking for to initiate the pull. And the hips back to initiate the start down is great: simple and effective.

Finally, anytime you choose to spotlight Chastity Sloan, it works for me....

One question/comment, I think it can cause problems to teach people to front squat with the "butt back" queue like you would in a low bar back squat. The girl in the video seems to be having a ton of torso lean. I think it makes more sense to tell people to sit their hips straight down and drive their knees wide to get the legs out of the way. Since the goal is an upright torso, hips down makes more sense for front squats and overhead squats. Of course this can lead to people getting on their toes/forefoot which is another problem. When I started learning front squats I tried to sit back and kept losing the bar forward or having to muscle it with my hands, changing my thought process to hips down made a big difference.

I like the team competition idea. At our box, people just come and go as schedules allow. If we made a concerted effort to have a "team WOD" that would be one more way to spice it up and elevate intensity. It is just a matter of getting enough people to coordinate schedules and agree on a time.