Using The Kettlebell For Rehab by Jeff Martone - CrossFit Journal

Using The Kettlebell For Rehab

Properly implemented, the kettlebell can be a tremendous rehab tool. But don’t rely on YouTube videos. You need a good coach, advises kettlebell expert Jeff Martone in a video from Again Faster.

Jeff should know. He looks into the camera and tells his own injury story: lots of shoulder dislocations, messing up his back, and blowing out his ACL. His problems began in 1985, during his last year in high school. By 2000, he was facing a third shoulder surgery. But the doctor warned of diminishing returns.

That’s when Jeff turned to kettlebells. He found lots of reps built strength and endurance. Turkish Get Ups were especially helpful. Jeff has been injury free and surgery free for the last nine years. Now he’s using what helped him to help the people he trains. 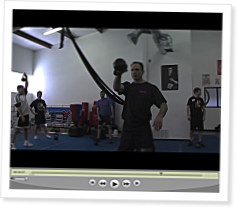 Learning The Turkish Get Up

You can learn a lot about the kettlebell clean with a whiteboard eraser tucked in your armpit.

The Swing: Body Awareness in the Set-Up

Join CrossFit Kettlebell trainer Jeff Martone as he adds more kettlebell movements to the CrossFit toolbox. In Part 3, he shares one of his specialties: the Turkish get-up.

“This is another… Continue Reading

10 Comments on “Using The Kettlebell For Rehab”

He is right, I messed up both shoulder from Martial Arts,Swimming and my trade. Since Ive been training with kettle-bells my shoulder feel bullet proof. Also may I add the club-bells, and rings done wonders too. I was not able to sleep on my side now I can.

Good story. I recently had shoulder surgery to repair torn cartilage causing dislocations. You can bet I will build more TGUs into my program.

This was fantastic information! I just came off of a rotator cuff and labrum tear surgery about a year and half ago, and have had four knee surgeries (and I am only 27). I have been very careful in my rehab to strengthen, not doing anything to re-injure. I am anxious to get to a kettlebell cert to learn how to properly use this piece of equipment - I think it might change my life as it has done for Jeff.

I have been training with kettlebells for 8 years now. I am a former gymnast(ring specialist) who had chronic shoulder problems. Partial tears on MRI. A mess. The kettlebell gave me back my life. I am 50 years old and have better ROM and stability in my shoulders than I had when I was 20. I am a chiropractor by profession and I recommend kettlebells to my patients all the time. They "fix" things. They correct imbalances and build central stability and teach you how to move functionally. I would agree with Jeff in that you need to learn proper technique so that you get the benefits without the risks. Great stuff.

Great video! I've been basically off Crossfit for the last three weeks with tedonitis in my rotator cuff...I've just started back and am taking it easy. Was thinking of adding in the kettlebells, and now am definitely going to do it. Thanks for the information I needed to make a decision!

so by learning and doing all the kettlebell motions that you can muster, it's generally a great rehab tool for any type of issue? Or is there something specific to do with the kettlebell that will lead to a healed/rehabbed rotator cuff? I have a client that is really tearing into me and my knowledge (or lack thereof) about shoulder rehab and I don't want to look like a doofus next time i go to work with her. She tore her rotator cuff (doesn't know how). I tried to explain the ROM using the kettlebell and the fact that it passively engages the 4 muscles of the rotator cuff, but she wasn't hearing it. I talked to my wife (she's my wife's massage therapy client), and said she was headstrong as it is. Any thoughts guys????? Thanks!!!

Is there a part 2 to this where Martone explains exactly what movements he did to rehab the shoulder?

"the day I can't lead by example, is the day I need to change careers"

I have always done the full KB swing but have recently been told that taking the kettlebell over my head will evently ruined my shoulder joints and that it is only necessary to go to eye level??

I am experiencing some minor shoulder pain (discomfort) that is "scaring" me away from working out. I don't want to make it worse. Not working out is driving me crazy, and there are only so many things I can do without the use of the shoulder. I am currently deployed to Iraq, and don't have access to kettlebells. I also am not able to download or view any videos due to network restrictions. I know that the fix for this issue is not to just let it rest for several weeks. what can I actively do to get my shoulder back in shape? thanks