The Holy Trinity of Strength Training

Bill Starr writes about the holy trinity of strength training.

If you’re looking to build brute strength, you need to avoid machines and biceps curls. Instead, focus your time in the weight room on a small number of core exercises that hit the main muscle groups.

We selected three exercises: bench press, back squat and power clean. We called them the Big Three.

The main reason the Big Three works well is that all the energy of an athlete is put into making the large muscles and corresponding attachments stronger. The main problem with routines that consist of numerous exercises is only so much energy is available. When it’s spread out over a dozen or more movements, none receive much attention. Therefore, we do not get stronger.

It’s my observation that those in charge of putting together strength programs in high school, colleges and professional sports have reverted back to the same mistakes their predecessors made in the ʼ60s. There are far too many exercises in nearly every program I’m asked to examine. In truth, the athletes who are using this multi-layered concept aren’t getting that much stronger. They might get a little stronger, but not nearly as much as if they had applied all their energy to moving iron.

Three is the operative number when designing a beginning strength program: three basic exercises for the three major muscle groups done three times a week. This program is equally useful to those starting back into a strength routine after a layoff, as well as those wanting to maintain a high level of strength fitness at any age.

Simplicity is the key to success in strength training—so keep it simple. 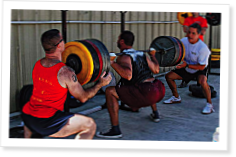 There are 22 comments on this article. Login to add your own.

The Value of Mental Rehearsal in Strength Training

Bill Starr explains how you can use your mind to get the most out of your body in the gym or in any athletic endeavor.

By Shane Sweatt and Laura Phelps-Sweatt

Join Shane Sweatt and Laura Phelps-Sweatt of Westside Barbell as they demonstrate bench-press set-up and technique. Phelps-Sweatt’s best bench is an incredible 530 lb.

22 Comments on “The Holy Trinity of Strength Training”

Hurray!!! An actual article! And by Bill Starr as well.

Many more articles from Bill Starr are in the works. Stay tuned.
-Daniel Freedman, Editor-in-Chief

I would also love to see more articles about Crossfit Strength-Bias.

The article written by the gentlemen from Crossfit BrandX begs for more,

"...a number of other physical
activities attached to the weight workouts: jumping up
on boxes, drills on grids for foot speed, pulling ropes,
dragging sleds, a circuit with kettlebells, and, of course,
some type of plyometrics. ...

"Sounds great on paper, but in reality it doesn’t work.
...Those various gimmicks are tiring. That’s the rub. They use up energy
that should be applied to primary weight movements."

...so where does Crossfit fit into Bill Starr's program? Or does it count as various gimmicks?

A very informative article. I am interested in how Bill approaches progression regarding the amount of weight from week to week. And yes, just where does Crossfit fit into Bill Starr's program? It doesn't appear to ..."uses up energy"

I think he is writing from the perspective of a pure strength program/coaching, which CrossFit is not. CF is great for what it is, but if you had two athletes, one on a pure 5x5 strength program, and one on CF mainsite WODs, the former would get stronger faster, however the latter would have superior GPP and ability in the other 9 domains of fitness as defined by CF. Just depends on the goal of the athlete in question.

He stated that for a beginner, or someone coming back from an excessive layoff, simplicity is key, It establishes a strength platform from which to build into more selective ventures. What good are the WODs if you can't even do a pushup or jump on a box? get the idea?

It seems to me that Bill Starr's methodology, is similar to Mark Rippetoe's "Starting Strength."

How does this balance with coach Rippetoe's comments in the "CrossFit Total" article on the bench press being "not a very functional workout"? Or is the goal different between your article and his? Also, what do you think of Iron Minds philosophy of squat, dips, pull-ups?

So what is an appropriate workout program for a HS athletic program. If you are doing the big three, 3x a week are you still to perform the WOD's? Do you need to scale down? Is it similar to CF Strength Bias in that you do it in addition?

I don't want to lose the WOD's, our kids love those. And, am I correct, if it is CFSB you do the strength work then the WOD. Right?

In the article, Starr sates " ... we believed the press was the best upper-body exercise for athletes, it was getting a great deal of bad publicity
at that time .... Although neither of us believed the press to be
harmful when done correctly, we didn’t want to deal with that battle. We were already fighting one over full squats and their effect on the knees. The flat bench
became our shoulder-girdle primary exercise."

I believe Mr. Starr is speaking from a beginning high school strength program. Having gone through one of these programs and seeing how these programs are run now, he is right. You have to master the basics first. For comparision sake, remember, the don't throw a newbie into a full prescribed WOD right off the back, you have them work on things like squats, pushups, pullups, sit ups, etc. Once they have the form down and a level of GPP, then you might have them do a scaled WOD, followed by something fully prescribed once they are ready. Mr. Starr is speaking of the same thing on a beginning sports strength training level.

Great article. I noticed a few posts citing the similarity of Coach Starr's approach to Coach Rippetoe's. Trivia question....What is the name of the former owner of an olympic barbell set proudly on display at Rip's WFAC? Keep these articles coming by Coach Starr!

If I'm not mistaken, Coach Rip has stated words to the effect that Coach Starr has forgotten more than he (Rip) ever knew - IOW, strong admirer of Coach Starr's methods and character. However, Coach Rip's training has evolved to what we see in Starting Strength and Practical Programming.

As for the question of where the 'holy trinity' fits within CF - the same niche into which Starting Strength fits. If you need a bigger, stronger, less fit (by the CF definition) athlete, you now have two readily available strength programs from which to pick. Because Starting Strength is an entire book, it is larger and more complex than 'holy trinity.'

...so where does Crossfit fit into Bill Starr's program? Or does it count as various gimmicks?

That is the best article that I've read in a while. I just makes sense. You have to trust in yourself to rest to get the greatest gains.

I do believe that the Big 3 are covered in Coach Starr's book "The Strongest Shall Survive", which was written way before Starting Strength and is also available from the Aasgard Co. Excellent book.

I'd just like to add to the pile of affirming comments about this article, and to keep them coming please! I've seen many calls for CFSB follow-ups, has there been a second round of guinea pigs that have adapted CFSB program? or that have continued for many cycles?

We've just finished our crew on a 16-week strength bias. Despite the SB article saying it's for intermediate/advanced athletes, many of ours were beginners and learnt the movements for the first time during the cycle.

Our results in a word: awesome!!

We just ran a CFT tonight and most of our athletes are well and truly in the Intermediate category with one female pushing very close to Advanced. Not bad for a bunch of beginners!! We also have one member of the 1000lb club at a B/W of 187lbs.

I'm flat out and am no author so an article wont be forthcoming but to be honest, we don't need another. The first explained everything adequately and a second would just re-affirm what the first said.

My advice, just do it. Read the SB article. Implement it. Monitor your progress and enjoy the results.

BTW, I dropped 10kgs, but improved my CFT by over 25kgs and finally got the 2 x BW dead I've been chasing since I started CF.

As always, great article by Bill Starr. I like the article's and still prefer the old CFJ.

Muscular strength is an absolute requirement for short to mid-range muscular endurance. I disagree with the assertion that adding strength work will make any athlete less fit - in any definition you choose. I would even go one step further and say out of a 7 day cycle (3on, 1off, 3on), alternating strength and metcons will get an athlete more fit in the 10 dimensions than just metcon work alone...

Quick question, which I will also post in the message board as I think its important. This article (along with a number of other publications) advocates a 5x5 protocol. Is this an "ascending 5x5", or a sets across? I know in the CFSB system, they advocate a few warm up sets, but basically shoot for "one st above PR." I believe they even go on to say that 5x5 sets across rarely works.

Does anyone have experience on both systems?