This video tells of the birth of a CrossFit affiliate within the United States Military Academy at West Point, New York. It all began with a handful of cadets doing CrossFit workouts.They faced obstacles familiar to civilian CrossFitters: a globo gym environment complete with mirrors, curl bars, and dirty looks from people using machines and doing body-building exercises.

Major Dan Blackmon describes how CrossFit grew on the West Point campus. An important milestone was sending some cadets, who were early adopters of CrossFit, to a cert. The breakthrough came when the West Point Class of ’62 contributed funds to fully equip a CrossFit gym called Black and Gold CrossFit. Today, voluntary CrossFit workouts at West Point attract as many as 100+ athletes.

The video includes Cadet Chris Villareal describing how he built a custom pull-up bar structure that can accommodate up to 18 athletes doing kipping pull-ups at the same time. Chris fabricated the structure as a project for his engineering class.

Dan sees every soldier as an athlete and should be treated as such. But unlike professional athletes, soldiers don’t know when and how the game will be played. That’s why they need to be prepared for everything. Conventional PT tests are no longer good enough because they measure only push-ups, sit-ups, and how fast soldiers can run two miles.

The cadets seen in this video will soon be second lieutenants in the United States Army. They are using CrossFit to prepare not just for the PT tests, but also for the rigors of combat. 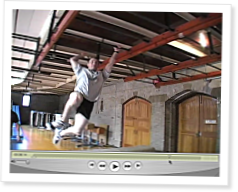 On March 19, 2008, a small group of Marines led by LtCol Dan Wilson loaded the entire contents of the original CrossFit Santa Cruz into a tractor-trailer. The next day, a larger group… Continue Reading

“We get a lot of people that run from cars, run from scenes of crimes, things like that, that us as officers, as humans, would never find, but we use the dog’s nose, we use their… Continue Reading

In this video, Tony Blauer explains a drill to defend against a two-handed choke. The video was filmed at CrossFit Virginia Beach.

What kind of motivation do you bring to your WOD? Perhaps you think of fulfilling your own goals, triumphing over your past experiences or beating your fellow athletes in the… Continue Reading

I started with B&G CrossFit back in October-November 2008. I just planned to add CrossFit to my current training regimen. But after a month, I was hooked. The workouts from B&G meshed well with my rock climbing workouts and kept me coming back for more. I have seen massive gains in my fitness since then. I have increased my strength, speed, balance and have discovered a new confidence in my ability to perform the movements necessary to function in a real world environment. The work done by Dan H., Chris V., MAJ Blackmon and the other 'founding' cadets and officers has been vital to advancing the fitness of the future soldiers at USMA. Thanks.

Awesomeness. Anyone who says "The Corps Has" never met Fran. I can't even imagine a climbing Fran. But AGAIN the video editors left out the most important event in the IOCT ... the 5 gallon bucket! :)

Keep up the good work!
I can't wait to see the finished product.
See ya'll soon!

Bummer that the video spends so much time talking about their unique pull-up rig and never actually shows the dang thing!

I wish we had Crossfit back when I attended West Point - the IOCT (obstacle course) is a killer....

I can only hope that the Army grabs ahold of this. Ever since I left the regular Army and the normal P.T. my general physical fitness has improved as well as my P.T. score. Hopefully when I get back to the regular Army, CF is the norm.

Great video. I think the CrossFit Games needs to take a page from B&G and add an obstacle course. In my opinion, that's the point of functional fitness.

Hey that is awesome stuff.. Look forward to seeing some of those young soon to be 2LT's when they come to Ranger School after BOLC (IOBC).. Work at Rogers/Darby..

I will say that without a doubt Crossfit has helped me to be a more physically fit soldier and a better Squad Leader to my Medics. I suffered a Tibial Stress Fracture in April of 2008 on a Parachute jump on Holland DZ, Ft Bragg, and could not run for 2 months. I continued Crossfit and it seriously helped my run times from slipping by much. It also helped get my body ready to successfully complete Ranger school and kept it strong until my 2nd time in Mountains, but thats a totally different topic on Muscle Breakdown, Fatigue and Starvation.

Great story and nice to see our future military leaders are reporting to their units in awesome shape..

Cool video coming from Parkour background especially love the obstacle course. One question though why a forward roll? Its far less safe and functonal then a shoulder roll.