How Did We Get Here? by Greg Glassman - CrossFit Journal

How Did We Get Here?

The beer and the accents may be different, but CrossFitters are much the same the world over, Coach Greg Glassman told participants at a Level 1 Cert at CrossFit Brisbane in Australia on May 16, 2009.

Coach Glassman said his goal is to provide opportunities he wished he’d had as a young trainer. To this day, there is no CrossFit business plan. His approach is to make the meatloaf he’d like to eat, and write the novel he’d like to read.

It’s been an interesting journey. As a teenage gymnast, he’d done something unusual by using weights and cycling in his training. “I understood that my moderate capacity in three different domains conferred a physical advantage that nobody got with a single focus.”

He began training people while still in his teens, working at what CrossFitters now call globo gyms. He saw lots of bad stuff, including training that didn’t get results and questionable business practices. Sometimes he would hang gymnastics rings, only to see them cut down. He often disagreed with gym owners and got kicked out of his gym—and his job.

After almost twenty years in the fitness business, he finally made the decision to go off on his own and do things his way. The CrossFit website was launched a few months later and the organization has grown rapidly ever since.

His hope for the future of CrossFit? More of the same. 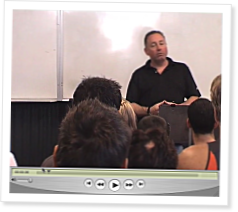 Pursuit of Excellence With Greg Glassman

“I can tell you what it is that makes you successful in business, more specifically as a CrossFit affiliate,” CrossFit founder and CEO Greg Glassman says. “It’s the blind and relentless constant pursuit of… Continue Reading

“It’s a quantifiable approach to a finally well-defined notion of what fitness is. That is what CrossFit is,” CrossFit founder and CEO Greg Glassman says in defining the program he created and showing how… Continue Reading

At the Chalkboard: Core Stability

The best teachers can simplify the most complex concepts, and Coach Greg Glassman always did so by including a session at the whiteboard before workouts at the original CrossFit gym in Santa Cruz.

At the 2011 Reebok CrossFit Games, CrossFit founder and CEO Greg Glassman sat down with Fast Company Magazine to talk about CrossFit.

In this segment, Coach discusses the success of group classes and… Continue Reading

Coach as always we love hearing all the insights of how CrossFit got started, and we thank you for it everyday. Keep up the great work!

Coach tapped into a long standing idea of mine when he talked about being a better cyclist than the other gymnasts etc. I realized early in my Navy career that I wasn't going to be the fastest runner or swimmer or the strongest guy. I decided I would run better than the swimmers, swim better than the lifters etc. It worked well. I wish I had CrossFit for it though. That would've saved me a lot of time for better results. Thanks for the article Coach.

No matter how I often I hear Coach talk, no matter how many times I see him speak publicly or privately, I am always struck by the clarity of his vision and the sincerity of his words. Honored to consider him a friend. Behind you 100%, Coach. Thank you to you and Lauren and everyone who makes this crazy thing called CrossFit what it is.

On the point of picking the gym you would have wanted to go to and the trainers you would have liked to train with, it bears a remarkable similarity to one of Gandhi's most quoted phrases: "Be the change you wish to see in the world."

Because of you Mr. Glassman, a crossfitter can be spotted from a mile away. And because of this, all crossfitters truly are related.

I just wanna say that I find every article and every video more motivational and inspirational than almost anything. When I encountered crossfit, it was like a breath of fresh air as it is for most people, I think. I don't know how anyone could possibly want to go back after trying even one WOD. Thank you, coach and thank you to all who follow his footsteps.

Thank you Greg... We are proud representatives of this community and your journey as a professional trainer is one we all identify with! LALANNE FITNESS is powered by CrossFit, serving COOL-AID to one globo-gym victim at a time!

I've always wanted to hear this story - got to hear it in Ramona this weekend, too. Awesome. Thanks, Greg and Lauren!

I needed that!......I'm almost finished with the affiliation stuff.....wondering "now what"......Coach as such a honest , straight forward way of speaking......very motivating......Thank you Coach and all the Xfit HQ staff....especially Kathy G.....

I'm just sitting here in awe of what a great man Coach is. Selfless, humble with massive common sense. A rare thing in this world.

I hope to meet you some day Coach!

The remarkable thing about Greg is what he says, his vision, has application beyond fitness. Thanks to Greg and the collective energy of my fellow CFers, I'm not just fitter in a physical sense, but in a broader, human sense. Thanks to Greg, Lauren and CFers everywhere.

I love to hear Coach talk, one of these days I'm hope to get to a certification to see the story first hand. I love the line, "make the meatloaf you want to eat and write the novel you want to read" just proves you shouldn't have to compromise principles and ideas to fit into the constricted box that society often exists in.

Make the meatloaf you want to eat.
Coach says that nowhere is hard work, honesty, trust, perseverance, etc. learned better than in the physical realm. By having this vision to create CrossFit gyms and CrossFit trainers that change how we work out we are all changing entire lives and families outside the gym for the better.
Thanks Coach.
I'm with you. Why not 12000 affiliates? With CrossFit we can change the tide of our culture.

So good to hear on so many points ... the consistency, the pragmatism, the synergy. If allowed to be here, I look forward to what the next generation, what the CrossFitKids will become, with the innovation and evolution in ten years. Thanks for all this, Coach!