Is “Punishment” a Dirty Word?

Your gym teacher may have had you running laps after class, but you won’t find much punishment in CrossFit. Mike Warkentin talks to John Welbourn and Mike Burgener about how they use “motivational consequences” to focus their athletes.

You rim out on a foul shot. The coach responds by making you run laps while the rest of the team scrimmages. He’s threatening more if you don’t pick up the pace.

The beatings will continue until morale improves.

What your gym teacher might have called punishment can indeed be found in CrossFit from time to time. In CrossFit Endurance WODs you’ll find the occasional “foul,” such as an isometric squat for two minutes if one running interval is slower than its predecessor. Similarly, “penalties” sometimes appear in CrossFit Football workouts. Olympic Lifting Certs are characterized by bouts of burpees.

But coaches such as John Welbourn and Mike Burgener don’t view the additional work they infrequently assign as punishment used to beat athletes into submission.

“I’ve played for coaches who were huge punishment guys... and I don’t necessarily buy into that because I’ve always been intrinsically motivated,” Welbourn says. “I’m able to get my own motor going. I don’t need someone to scream at me to do it.”

Burgener, on the other hand, will throw extra work at athletes to keep them focused, but he says it doesn’t take many burpees to keep a group on task.

“It’s amazing what transformation takes place when you have that threat, that motivational consequence of doing burpees,” he says. “Very, very rarely do I have to do very many burpees.” 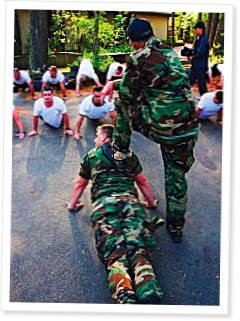 The Best of the Best

“You folks are the best trainers I’ve got,” Coach Greg Glassman told the 90 or so HQ Seminar Staff trainers… Continue Reading

“Really the same for the snatch,” he says of… Continue Reading

8 Comments on “Is “Punishment” a Dirty Word?”

I cant get all the text for some reason. Anyone else sufferring the same problem?

I had issues opening it within Firefox. I just saved it and it opened in with Adobe Reader 9 just fine.

Punishment is not a dirty word! I have occasionally used various individualized specific forms of punishment in my martial arts teaching endeavors for some 30 years. Pain, I have found, is a excellent motivator and teacher. I am not unkind but exacting on my students and the results are sometimes, or rather, frequently astounding. I enjoy seeing someone reach out and touch their potential in a particular area. It is very rewarding for me as their instructor but even more so to the student as they expand the boundaries of their capacity. I love what I do and I appreciate cross fit for what they are doing and for what they have taught me about fitness. Sincerely yours in the service of others, 7th Degree black belt, Grand Master Reeder

As a martial art student and now teacher, I have been on both ends of the punishment and discipline. I've always veiwed as a means to make me a better martial artist and athlete. Although thee general public doesn't seem to view the extra push ups for infractions the same way. Many adults don't like to be disciplined and are not disciplined enough on there own. These individuals gereneraly leave to pursue other avenues, and thats ok. I've been a crossfitter for about a year now and absolutely love how hard it allows you to push yourself. I have to say that I would love to see more crossfitters in the club as there is a certain mentality that goes with it, and it's one that I love to see.

"Burgener, on the other hand, will throw extra work at athletes to keep them focused, but he says it doesn’t take many burpees to keep a group on task".

I agree, I'm in the US ARMY; an Infantry Staff Sergeant. I believe that having myself as well as my peers do a few extra reps or sets if they fail to meet the standard is just that it is a tool to help refocus ourselves to strive for ELITE fitness. It is a way of letting myself know that this is what i need to do in order to get to that level of finess and performance.

I'm totally with you man.. I am not against having my squad get down and knock out 10-20 Burpees at mile 2 of a 5 miler if guys are slacking... Nothing wrong with that at all. Especially if the guys are slacking for whatever reason. Tiny Heart Syndrome is not acceptable in our business..

In response to Warkentin's article, I prefer Coach B's use of the term "motivational consequences." Words such as "punishment" and "reinforcement" have specific operational definitions and are often confused.

Many confusion intentions with what actually occurs. For example, paddling/spanking is still used in the schools here in Mississippi, but for many children, it actually leads to an increase in the problem behavior. So, what teachers intend to use as punishment actually functions as reinforcement for most children.

For trainers, most of these "punishment" techniques are used as penalities. But is the true intention to reduce mistakes, or increase WOD volume? I think its the former, but still ask yourself if your consequences are having the desired and intended effect.