The Squat: All About Hips and Knees by Mark Rippetoe - CrossFit Journal

The Squat: All About Hips and Knees

Coach Mark Rippetoe discusses the importance of the hips, knees, stance and muscle mass in the squat. The footage taken from his Basic Barbell Certification seminar at CrossFit Brand X in Ramona, CA on February 14, 2009. Among other things, Coach Rippetoe elaborates on themes also discussed in his 2008 CrossFit Journal article “You Don’t Know Squat Without an Active Hip.”

A very common fault occurs when athletes drop their knees in when they squat. They are not using their external rotators to keep their femurs in external rotation. They don’t get their adductors to contract and help with hip extension because the adductors never get stretched out into a position where they can contract.

That’s why stance and knee position are so important. Coach Rippetoe demonstrates both in detail. The stance is selected to involve as much muscle mass as possible. The goal is train stronger athletes who can lift heavier loads. 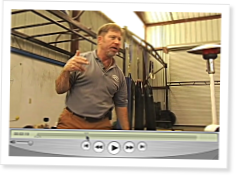 Mark Rippetoe demonstrates how to teach the press progression with a woman who has never before done the lift. This footage is taken from a Basic Barbell Certification Seminar… Continue Reading

Active Lumbar in the Squat

This footage is taken from his Basic Barbell Certification… Continue Reading

10 Comments on “The Squat: All About Hips and Knees ”

great explanation. would the same be true for front squats?

had to watch it 4 times to get it to sink in to the grey matter.thanks coach for a very good explanation

Ties in with the last Dave Tate vid - experienced lifters engage more muscles in every lift.

Front squats are useful for Oly lifting, and are not as useful for maximal muscle recruitment. A front squat engages more of the quads and less of the posterior chain. The altered center of gravity and subsequent back positioning takes out those PC muscles to a certain extent. Starting strength discusses this at length.

Both the front squat and low bar back squat are functional, just in different ways.

This would seem to explain why my adductors get so sore after swinging kettlebells for a lot of reps, or am I off??

What I have enjoyed of late is the clear contrast in what makes a back squat v front squat fail. When I can't deliver a good back squat, it is due to weakness in hip drive. Front squat failure is tied to lack of requisite trunk strength to sustain the weight ahead of center line. At this point, I'm weaker on the later area and thus am enjoying the front squats more. Which is not to say that I don't want and need more hip drive ...

Great instruction on how and why. Great follow-up would be more info on inexperienced athletes struggling to perform the squat. Two functional errors that I commonly see are knee valgus (knock-knee) and excessive lumbar flexion. Follow-up could discuss which functional errors can be addressed by the trainer and which need outside attention.

... but more to the point of this piece, and Coach Rip's last, the focus on 'knees and toes out' would have helped three trainees I've worked with in the last year. One had hip pain until I had her open knees/feet even more than she was - and two I could tell they were not getting sufficient glute/ham activation, and were getting too much butt wink, but didn't know how to coach them out of that - kept thinking they would get it with more practice.

Outstanding explanation as to why we don't have "parallel legs/knees"...I am constantly impressed with coach Rips thorough explanation of muscle/skeletal movement. Being "thick",I often have to watch the vid a couple of times...but thats just me!!! Thanks coach for your time and effort, you have improved my knowledge and training dramatically!