Less Is More for Champion Runner

Scott Hartley thought his running career was over. Then he discovered CrossFit at 44. Parker Morse tells how Hartley went from the sidelines to the finish line and became one of the fastest masters runners in the United States.

Scott Hartley is defying just about everything: the odds, conventional wisdom and his own running past.

Early in March, Hartley, from Nunn, Colorado, won the 800-meter and one-mile races at the 2009 U.S.A. Masters Indoor Track & Field Championships. In April, he won the masters mile at the Drake Relays, one of the biggest and oldest track meets in the United States. On a 200-meter indoor track, Hartley ran 1:57.89 for 800 meters—within four seconds of his all-time PR, which he set half a lifetime ago as a Division 2 collegiate athlete at the Colorado School of Mines.

Hartley’s system involves fewer than 20 miles per week and very little of the traditional high volume training developed by legendary coach Arthur Lydiard. A combination of middle-distance training and CrossFit has meant an extraordinarily low-mileage program, and Hartley is actually running between 20 and 40 percent of the miles run by other athletes at his level.

He’s working just as hard, though, because his training calendar is liberally sprinkled with names like Michael, Fran and Cindy.

“My weight hasn’t changed at all,” Hartley says. “My appearance has. It’s been nice not to have to give up strength in order to run.” 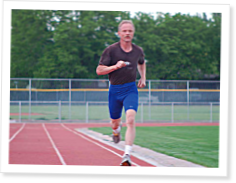 After the training comes the race-day strategy. Parker Morse offers tips to help you race like a pro and set a PR.

Dr. Nicholas Romanov is in front of a crowd of CrossFit subject-matter experts, HQ trainers and media to explain how to run efficiently, safely and sustainably—how to run in the Pose Method… Continue Reading

Greg Amundson, on a challenge, decided to try and run 100 miles in 24 hours using only the main site WODs as his training.

“I haven’t ran more than three miles in four months.”

11 Comments on “Less Is More for Champion Runner”

For some reason, PDFs no longer properly download for browsers other than Explorer (Mozilla, Chrome). It would be nice if this could be fixed. Thanks.

Ned,
It works for me in Firefox. Anyone else?

It has begun...Looking forward to seeing many more articles such this in the near future!

Cool article, very inspiring. Good to see some other old-timers still out there ripping it up! Scott, your times are unbelievable, way to go!

So, for all those over at slow-twitch that wanted to know if CF-CFE programming will work (albeit this isn't an Ironman Tri) I guess the answer is yes.

Not to question the efficacy of the program, but the way the article is written is a bit disingenuous. It blatantly misrepresenting the orthodoxy, which blinds anyone that hasn't already drunk the kool-aid to the potentially CrossFit has for endurance athletes.

The greatest 800 meter runners I ever saw run trained used programs that involved mileage very similar to that employed by Hartley. Men's world record holder Wilson Kipketer (whose 1997 season ranks as one of the most impressive seasons in any track and field discipline) and Maria Mutola (who has thirteen gold medals in the 800 world and Olympic championships) both trained less than thirty miles a week.

The 800 is almost a long sprint. Some top athletes prepare for the even using considerably more mileage, but the training of Kipketer and Mutola is normal, not exceptional. Top marathoners train more than a 100 per week, middle distance runners don't. Some of history's most successful milers, and even 5 km runners, set records and won championships on less than 50 a week-- Roger Banister, Sebastion Coe and Said Aouita jump first to mind.

Again, I'm not disparaging CrossFit in anyway; I want everyone to know what an amazing program it is. But I think that using a false dichotomy to illustrating its effectiveness, one that is easy to point at and say "those crossfitters have no idea what they are talking about when it comes to running," makes the job of a CrossFit prostylizer more difficult.

Robert, those are very good points. If it helps in your proselytizing, Sebastian Coe is a great case. His training methods were very "crossfit - like," involving lots of box jumps, weightlifting, and gymnastic elements, primarily developed by his father, Peter Coe. They came up with a good way to characterize what they were going for with these exercises, "the coordinated transfer of weight through the body." One of those phrases that kind of stuck with me. Anyway, according to some guys I know who used to run for Adams State (where Seb would put in an occasional appearance) Sebastian could back squat twice his body weight. Almost all his running was at race speed.

Leaving that aside, it is just phenomenal to me what Scott is doing. Running a sub-2:00 800m in the mid-40's (I am 45) doesn't even seem possible to me. What an accomplishment.

@Robert - I'm not sure I completely understand which part of the article is "completely" misrepresenting the orthodoxy. I haven't drunk the Kool-aid; I'm a runner.

If your point is that suggesting that there is an orthodoxy is a misrepresentation, particularly at 800m, I'd have to agree with you. At 800m there are several approaches meeting; one is the long sprint, as you say (Mutola is an example, likewise Kipketer; among today's Americans I'd point at Khadevis Robinson as a "long sprint" guy) but Scott is a miler too, and few to zero mile/800 doublers approach the mile as a long sprint. Here, see Nick Symmonds and Andrew Wheating, both milers running short, and the season's best American woman at 800m is Anna Willard, a steeplechaser with a marathoner for a coach. On the other hand, Coe (nice point, Christopher) was a mile/800 man himself, and he's still the second-fastest 800m runner ever, full stop.

Citing elite athletes to support a point is tricky, though, because there aren't enough of them to be statistically significant, and you can always find one to back up nearly any training decision you want to make. Also, by definition, they're outliers.

The current issue of Running Times includes an article by Chris Lear on Tony Waldrop, who held the NCAA mile record until this year, urging young milers to train like marathoners, which translates directly to "run more mileage." And while that approach might work for some, it obviously wouldn't work for Scott Hartley; he tried it.

I came in to this piece expecting to find out that Scott and Conrad had turned training on its head, but that wasn't what I found. Scott's still following the real training orthodoxy, which is "hard work makes you faster." Scott has taken a different route to the strength a champion runner needs in order to handle very fast speedwork, and he's successfully ignored the accepted wisdom among distance runners that lifting leads to bulk. (And distance runners know the physics: two seconds per pound per mile, all other things being equal.)

Which brings me around to Charles: Another thing I wanted to know is how much of Scott's approach could carry over to longer races (5k, 10k, etc.). I don't think I found a good answer to that, but I do think Scott's success should be considered encouraging for people trying such an application. I think the message from Scott Hartley is "there are more ways to work hard than high mileage."

Robert, maybe that's what you were looking for, too?

See Scott's results from USATF Masters Nationals at http://www.usatf.org/events/2009/USAMastersOutdoorTFChampionships/results/complete.asp . Summary: fastest time across all age groups in the 800m, second-fastest in the 1500m (and fastest in the M45 age group).

I am from Oshkosh where the US Masters was held and saw first hand both of Scott's perfromances. They wer impressive and what was evident was his strong kick. He won both Races turning on the afterburners, his Strenght in both Races
was impressive! Most middle and distance runners don't look real healthy, so it
was good to see a Strength Ahtlete perform well. Cross Fit can keep you healthy
for a Lifetime whereas running only will wear you down and Age you.

Great Job Scott, I enjoyed your Performances, I have now switched to Running more Speedwork to Supplement my Cross Fit workouts.

Scott's performances are inspiring to say the least. There might be some 5k/miler types who do 100 miles per week. Parker's possible overstatement of Scott's competitor's running distances is NOTHING compared to the bad advice for middle distance runners (particularly young ones)dished out in some distance running blogs I've read. Invariably it suggests doing more distance and repeats of race distance or slightly shorter. The 800/mile range requires strength and speed than these 10k/marathoner types ever commit to their training. 300 meter repeats are a good core regimen for milers. Craig Masback asked "why do we do quarters?" (400 meter repeats/intervals), decided 300s were the ticket and became America's best miler for a time. Scott, I am embracing cross fit to emulate your efforts (in my own extremely modest way)if my 55 year old hip ravaged by too much distance running will allow it.