More About the Snatch by Again Faster - CrossFit Journal

More About the Snatch

During the lunch break of an Olympic certification seminar at CrossFit Old Town in Alexandria, Va. On March 7th, 2009, a participant named Alex was fortunate enough to get some one-on-one training on the snatch from Mike Burgener.

“Keep the knees back,” Coach Burgener says no fewer than 23 times. To drive the point home, Alex is repeatedly made to do super slow first pulls. Coach Burgener instructs Alex that the knees, bar, shoulder and hip should all rise at the same time. The thought process should be: knees, back, bar up. It’s critical the legs do the work. That puts you in position for the re-bend. If there is no re-bend, there is no elastic storage of energy. The re-bend uses momentum on the barbell.

Coach Burgener tells Alex he would do nothing but snatch drills for two weeks, were he a regular trainee. He says you can’t worry about weight at the beginning. You have focus exclusively on position. But at the end of the two weeks, Alex would set a PR. 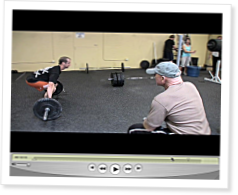 Chastity Slone trains at Practice CrossFit with Josh Bunch. She is a professional Figure competitor who is shooting for the 2009 CrossFit Games.

Two days after she … Continue Reading

This video is a profile of Shane Hamman, told in his own words and actions. Shane holds all the U.S. weightlifting records in the 105 kilogram plus category and holds the… Continue Reading

Eleiko has over 50 years of experience in the business of creating high-quality bars and plates for some of the world’s strongest athletes. In fact, over 900 world records have been set with… Continue Reading

11 Comments on “More About the Snatch ”

How much was KC lifting there for his last rep?

How amazing was that? And the length of video was excellent! How lucky are we CrossFitters to have access to such fantastic coaches? Coach B, you da man!

This is extremely helpful.

Looked like Casey had 325 or 335. Or slightly less if they have 20kg (44lbs) plates instead of 45lbs plates. Not sure how common those are in the States but the weightlifting world measures in kilos not lbs.

Very helpful video. I'll replay this one frequently as I work on my form. Thanks for making it available.

So basically deadlift to a 1/2 squat position, then explode into the snatch or clean? Is that an easy way to explain it to myself? I don't have a Oly coach but know how to deadlift correctly.

It's slightly different as the purpose is getting into the right jumping position (versus pulling max weight in a deadlift), so you are going to have lower hips, more upright torso, see this article http://www.cathletics.com/articles/index.php?show=shorty&shortyID=49

The depth of knowledge Coach Bergener possesses is stunning. His use of the stick to have the pupil "feel" the uneven pressure at the start of the pull is genius. It's those cues that the average trainer misses when teaching technical lifts. That was a pleasure to watch, on many levels.

Extremely helpful! I'll be using some of Coach B's cues with my clients.

Finally!
I finally understand why it's just jumping and landing!

That's the first video I can recall showingn in detail where the first pull finishes and the second starts and how one sets up for the other. OK, now I can teach myself the snatch.
Not well, I'll definitley take all the advice from experienced coaches that I can get and I'm going to get a lot of details wrong, but now I finally undersrtand how everything fits together.

Has my vote for "most useful video ever".

Until the next one.