Playing with the Girls

To what extent can past athletic achievement be used to predict future performance? And what’s the best way to crunch the numbers? Mac Ward and Gillian Mounsey went looking for answers with a special workout. Gillian finished third in the 2008 CrossFit Games. Mac is a Marine who runs CrossFit Cherry Point.

Mac used a workout he called “Diafranabeth.” It combines the first round of Diane, the second round of Fran, and the third round of Elizabeth.

Then it was off to Mac’s garage for the workout. Mac jumped behind his camera to record the results for posterity. Turns out Gillian’s predictions were pretty good.

Editor’s Note: Always the provocateur, we asked Jocelyn Forest from CrossFit West Santa Cruz to try her hand at the workout also. Jocelyn won the 2009 CrossFit Games NorCal Regional Qualifier, and will be competing against Gillian at the Games on July 11th, 2009. Jocelyn’s Response video ... [wmv] [mov] 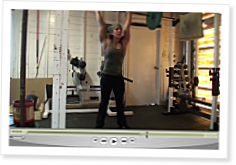 Adrian Bozman and Todd Widman are two of CrossFit’s top trainers. They spend a significant portion of their time traveling around the country working the CrossFit Level 1… Continue Reading

21 Comments on “Playing with the Girls ”

His voice is hypnotizing.

What an incredible idea and mix of 3 wods; Great job Gillian and Mac. I would love to see more videos like this...PS Good luck at the games Gillian

WOW!!!!!!! that's crazy how he came up with that workout:) I want to try it now. Im more then sure my time is going to suck but i want to put myself through it. what would the weights be for a guy any one???

After Gillian finished the WOD, I went with the second option...

So it seems to me the magic formula(if there is one) to predict the finish time would be to average all the times at men's weight, all the times at women's weight, average those two, then average that with the average of the fastest and slowest times...sweet, I love simple things!
Very excellent performance and idea for the WOD...gotta try that one myself.

yeah i think i'll take the second choice as well:):) I can't wait to try it. I need to write the workout down before i forget the numbers. thanks for the scale down

Gillian, I love your methodical approach to getting the work done properly with near perfect technique and full range of motion!!

Really nice work from both women! Like Tom, I appreciate the attention to form that Gillian gave to each movement - honoring the movements in their entirely as opposed to blasting through them in order to shave seconds off her total time. Really nice to watch.

Interesting as well to see how another athlete fared in the same workout - I wonder how much advance notice she was given, since Mac didn't tell Gillian the workout until that morning.

All in all, a very interesting piece. Very cool.

I bet gillian could of done it just as fast if she really pushed it. Looked like she might of gamed/paced it a little to much. crazy good efforts none the less.

Very impressive times. Can't wait to try the heavy one. I like Jocelyn's approach. Intensity is the key.

If I'm not mistaken, Gillian's intention was specifically to perform each movement with the same attention to form for every single rep. It was designed to prove their predictive hypothesis, rather than a WOD where you prioritize intensity over technique.

you look great! that was so motivational....you are truly amazing! I love watching you. you make everything look so effortless....

You are right Staci, Gillian's performance didn't prioritize intensity at ALL...

Actually, it brings up another intriguing supposition: If we were to assume that the two athletes were of comparable ability, is it possible to calculate the differential between the WOD performed for technique (Gillian) vs the WOD performed for time/intensity (Jocelyn) and then be able to predict how the athletes would do in the alternate effort? I have no idea what mathematical formala to apply in order to figure this kind of thing out - I'll leave that to the exercise science geeks :)

I would ABSOLUTELY LOVE to see a follow up video with their reactions on the time posted. Fantastic video, fantastic workout, fantastic effort!

something about that interview seemed very strange. it was kind of akward and definately planned out. what other movies do two bad actors get together and have some sort of staged interaction b4 getting physical for about 6 minutes? hmmmm...

Cmon guys, think about it-
Gillian's fastest Mens Fran time was under 5 minutes, right? 4:4something? That is with 95lb thrusters. So Im suppposed to be led to believe that at 80lb thrusters, she needs to break up 15 reps into THREE sets? Cmon...
Im guessing pre-games strategy, not showing all the cards in her hand-at full intensity Im guessing around a minute, if not more, off her time as shown.
Still a great video, and great performances on both womens parts-Cant wait to meet you both in Cali this year!
Brandon Crossfit NE Georgia

Watch any video of Gillian even at the games last year she was slow and methodical. She happens to be strong enough to push through alot of things that most cant but she moves slow. If Gillian wants to win the games this year she is going to need to push harder because at the current pace that she is moving she will get beat by someone who breaks there form for intensity, someone like say...Jocelyn.

Yes...but, depending on the strictness of judging, maybe only one of jocelyn's ring dips would have even been counted as an official rep. There is break in form, then there is insufficient range of motion. I wonder what Jocelyn's time is will full rang of motion on the ring dips? Still a minute faster? Let's see it!

That was great to watch someone do a tough workout with so much attention to good form. I love CrossFit, but I do see a lot of people banging out reps with bad form. She will have great rewards from doing it that way.