Mike Ray, MD from CrossFit Flagstaff, is a presenter at various CrossFit Level 1 seminars. He’s also an ER doc. This lecture on pre-participation screening is from the Science of Exercise seminar on April 26th, 2009 in Fort Worth, TX. The video is from CrossFit Again Faster.

Pre-participation screening of athletes is an honorable venture. The sudden death of an athlete is a tragedy in every sense of the term. The attempt to avoid or eliminate tragedy by pre-screening those athletes susceptible to it is natural and fully understandable.

Dr. Ray looks at some of the statistics associated with screening and sudden death. The conclusions are dramatic, and put the practice of pre-screening in a different light.

According to one source, 1 in 200,000 athletes under 35 years old are at significant risk of dying during athletic activity. If we were to develop a pre-screening test that was 99% accurate (though in reality, we don’t have anything nearly that good), 99.95% of all the positive test results would be false positives (the explanation of this is in part 2).

The first of two primary conclusions of Dr. Ray’s lecture is that as much as we would like to prevent tragedy, the statistical reality is that we don’t have a reasonable means of doing so with pre-participation screening.

The second primary conclusion is that as tragic as sudden death is, these tests are significantly more likely to stop safe athletes from healthy activity than they are to prevent unsafe athletes from harm. This is unfortunate and preventable with clear thinking.

Part 1 is the technical background to the lecture. 18min 1sec

Part 2 is the conclusion, from which the essence of the entire lecture could be garnered if time were a consideration. 10min 44sec 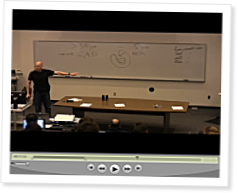 The Position: Part 3—The Push-Up

Very interesting! Two questions though:
1. How are P.P.V., specificity and sensitivity established/calculated?
2. So the essence is to let young people train irrespective of what such a screening would suggest? At least now I understand why we should buy into the RRG (not that I can, as I am not in the States) - this will result in serious legal action, if a young person dies while training. What is the solution?

You use the crude rates of your current test compared to the actual numbers(which is generall represented by a "gold standard test").

Sensitivity is the proportion of sick people who test positive. It is also, the true positives divided by the sum of true positives and false negatives.

PPV looks at it from a different view. PPV is the proportion of people with a positive result who actually have the disease. Numerically, it is true positives divided by the sum of true positives and false positives. The group considered (the denominator) for PPV is everyone who TESTS positives, in this case via using a preexercise screening program. The group considered (denominator) in sensitivity is everyone who is ACTUALLY positive (as determined by the "gold standard"). In the video, this means being able to identify people with actual problems, such HCM - which is usually done with an echocardiograph. The numerator of sensitivity, in this case, is the number of people identified as positive by the preexercise test.

I hope that it made it more clear. They are weird concepts to visualise without actually seeing the classic 2x2 tables....wikipedia explains it well.

Roland,
Did you watch the video or just read the abstract? The point is that the screening does little to nothing to prevent the 1 in 200,000 from dying. If you believe the numbers, you keep 1,999 young athletes from training who would otherwise have been ok.

Your assumption that a death will result in serious legal action is scary. Again, it's pretty clear you didn't actually watch the lecture. In the cases being discussed here, the cause of death is natural based on a congenital condition. Where then is the need for legal action? You seem to assume that we should be able to prevent all deaths. I have yet to meet anyone with that power.

Again, none of this data relates specifically to CrossFit. It is presented here in hopes that intelligent, caring folks will be able to recognize the difference between good intentions and responsible action.

Tony, I have watched both videos but unfortunately I did not attend the actual lecture. My thoughts were regarding to the inaccuracy of the test. If this screening is so untrustworthy it could be that some coaches/facitilies train athletes, although they have been screened and came back positive - I was stating that this could result in legal action on the behalf of the deceased athlete NOT that legal action would be taken if the athlete was a false negative.

Hi Matt, thank you for the clarification - it interestes me as to how the numbers are generated (I did understand the concepts though ;) ).

Oh maybe I didn't answer properly then? The numbers come from testing people using two systems: the gold standard and the "new" treatment/comparator. Gold standard would be something like full exam + echo and then have the same group of patients do the "pre-exercise screening test". Compare the results.

Most gyms/clubs/whatever make people do the cheesy paper test. It's easy. What's funny though is that many doctors really have no idea either. A patient will come in with high blood pressure or previous chest pain, and the only exercise guidelines they know are the same "silly BS" (to use Rip's words) that are constantly recycled.

These balances happen all the time in medicine. For some things it is better to err on the side of caution. Common examples are screening tests for colorectal or breast cancer. Most people don't have it, but you test many more and lots of false positives get further, more invasive tests done, that in hindsight turnout to be unnecessary. In this case, is it worth it to stop 1999 people from exercising? A sedentary lifestyle comes with it's own risks. Another interesting factor that risk factors do not determine disease. Say the test finds that 1 out of 200,000 people have a risk of sudden death, any of those other "low risk" people could still keel over during a crossfit wod, a marathon or playing frisbee in the park....

I found this article both amazing and scary. But I do have a couple of questions. 1) we were told of a fictitious test that caught 99% of both sensitivity and specificity but are there any statistics of the real pre-participation test? just wondering how inaccurate it really is.
2) Knowing that if one tests "positive" for the marker they can no longer participate in organized sporting activities, but to what extent are they "banned" from physical activity? Does it depend on the doc? Do they then go on to more tests?

Thanks for the help

I watched these videos with great interest since it is a topic I deal with daily. While it may be very difficult to accurately predict sudden cardiac death (SCD), it is easily responded to with early defibrillation.

A person who suffers SCD outside the hospital environment has a mere 5% chance of survival where AEDs are not present - primarily because survival rates drop 10% for every minute that passes prior to getting a defibrillation shock, and national average response times for paramedic staffed ambulances is 8-12 minutes. The American Heart Association recommends a defibrillation shock to a SCD victim within the first 3-5 minutes of their collapse.

Automated External Defibrillators (AEDs) have become a "standard of care" in exercise/athletic venues. I encourage RRG (and each Crossfit affiliate) to consider mitigating risk by having AEDs available to protect from the #1 killer of Americans, sudden cardiac death. Some may find it interesting that Harvard produced a statistic that people are 17 times more likely to suffer sudden cardiac arrest while exerting themselves (or shortly after) than at times of no exertion.

Feel free to contact me at spiffwalsh@yahoo.com for any clarification or feedback.