The contest to decide the World's Fittest Man and Woman began three seconds after the American national anthem ended.

Moments earlier, Coach Greg Glassman had opened the Games with a brief speech to a loud and enthusiastic crowd gathered in the sunshine at The Ranch.

The athletes, all carrying computer chips, sprinted over the timing pads and across the Stadium to open the run down the road and up and around The Hill. When asked afterwards if The Hill was as steep as he thought it would be, James (OPT) Fitzgerald--who was covered in dirt and grass--was blunt: "It's worse."

After opening the competition with an endurance event, Games organizers chose a deadlift ladder for WOD 2.

Sixteen men managed to pull their way through a series of bars loaded from 315 to 505, creating a log-jam tie for first, while 21 females broke the 300 lb. mark.

WOD 3 was a sandbag sprint with sandbags on shoulders--one 35 lb. bag for women, two for men. Athletes tore out of the Stadium and up the hill only to find a grind of a climb on the way up the viciously steep slope. For some the sprint turned into a walk.

The fourth event was a "blue-collar workout" that featured 500-meter rows bracketing a sledgehammer stake drive. Tommy Hackenbruck crushed the WOD in a top time of 4:36 and attributes his success to his old job: up until three months ago he worked construction and used a hammer six days a week for three years.

Saturday's final WOD was savage: three rounds of 30 wall-ball shots and 30 squat snatches. Early in the first round of the first men's heat, it was clear the workout would be a challenge that would send many athletes home from the games with a solid kick in the ass.

The regional qualifiers produced CrossFit's top athletes, and the Day 1 WODs distilled them further. Only 32 athletes will return to compete on Day 2, where one man and one woman will be crowned the 2009 CrossFit Games champions. 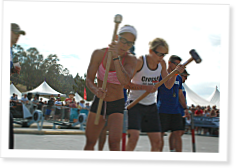 The Names and Numbers Behind the Games

The Sport of Fitness: Canada West

Mike Warkentin uncovers some of the interesting stories behind the CrossFit Games regional qualifiers and the athletes they produced.

Elite CrossFit athletes from around the world are now… Continue Reading

I was there awesome. The athletes are monsters I have a long way to go. They humbled me. I did a bluecoller workout 3 rounds of 500 meter row and 60 (20 lbs) sledgehammer swings onto a tire switching sides on ever rep. Wow! I want it to get a taste of the 4th event.
I do have a criticism on the 4th event though: (1) most of the athletes did not have proper form in swinging the sledgehammer,but their athletic abilities got them through. (2) The soiled varied from contestant to contestant, so some had very soft soil while others hit boulders or rocks in the soil.
It really was not an even playing field in my opinion.