By Any Means Necessary by Mike Warkentin - CrossFit Journal

By Any Means Necessary

Its selectorized machines gleam under spotlights. Someone triumphantly breaks the 150-pound mark on the torso-rotation machine as another person gives the hip flexors a proper thrashing during a set of biceps curls. A spin class begins in an air-conditioned studio where Top 40 hits are pumped out of an expensive stereo.

All that’s missing is a plaque from SF Weekly proclaiming the facility San Francisco’s Best Fitness Gym. That plaque, however, will not be forthcoming.

The title actually belongs to San Francisco CrossFit, which was awarded the accolade on May 20, 2009, as part of the readers’ poll portion of SF Weekly’s Best of 2009.

“If they had a category for best place to train under a canopy in a parking lot, we would have definitely taken that title, too,” jokes SFCF founder Kelly Starrett.

Canopy or no canopy, the fact remains that the rugged CrossFit affiliate managed to beat out a host of high-tech fitness. At CFSF, the equipment isn’t pretty. In fact, some of it looks positively post-apocalyptic—but it works.

“This experiment has been replicated a thousand times across the United States and across the world, and I think we showed that you don’t need a fancy gym. You need the quality core equipment and programming that is CrossFit. You may not even have walls, and yet this is good place to train in the city.” 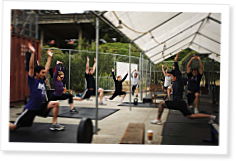 Virtuosity: A Call for Submissions

No Risk Retention Group, No Reward

We want to know why you love your CrossFit coach, affiliate or garage gym.

The desire to improve and seek perfection drives CrossFit.

Virtuosity is the soul of the program, and it’s pursued… Continue Reading

Current insurance policies may leave affiliates and trainers vulnerable to devastating lawsuits. The CrossFit RRG is insurance by CrossFitters for CrossFitters. The RRG offers… Continue Reading

On the Shoulders of Giants

A look below the top of the podium at the CrossFit Games.

Rich Froning was high-fiving volunteers on the evening of July 26.

It had been one of the longer days of competition, with… Continue Reading

14 Comments on “By Any Means Necessary”

It's great to see CFSF getting the good ink it deserves, especially after that poor article that was written early this month (or late June, I'm not sure.). Ironic that SF Weekly published both.

Keep up the phenomenal work guys!

SFCF is my home gym when I'm on the mainland. Love it, love it, love it. Everyone should swing by; I can't imagine not having a fun and productive time there.

Everything about SFCF seems amazing.

Also, congrats to Mark Warkentin on the flurry of PRs!

This is the best Gym I have ever been to. As a member of SFCF for the last 2 years I can honestly say that Kelly, Adrian and crew are some magnificent coaches and even better people. Its my pleasure to work out there daily.

Holy crap! I never knew how bad ass SFCF was set, and those sleds are kick ass! Talk about functional.

I've got 3 crowd control fences in my backyard too. They're very useful for many CF things.

Lots of buddy stuff to do with crowd control fences: squats, presses, runs. Running with arms locked out overhead is extra fun. I once got stopped by the NYPD at 5:30 AM in Central Park. My crime? I was one of two guys involved in a non-consensual act with a crowd control fence -- to wit, running up stairs with said fence overhead. The nice officer let us off with a warning after we promised to put the fence back where we found it.

I was at CFSF monday as a drop in and I loved it. I'm on vacation-leaving Sonoma tomorrow to watch the Phillys crush the Giants, then catching a workout there Friday. I can't wait AWESOME thing they have going.

Sometimes I ask myself "Where would you train if time, geography, and money were not an issue?" (right now its my garage) There are so many great boxes out there that I'd probably get an Airstream and try to visit them all, but CFSF would be first on the list...and probably the last as well.

Congrats, Kelly. You deserve the accolades.

This is friggin awesome. So much talk about "industrial or retail? what about my neighbors? How do I get gear together? How much should I spend?" when starting up a crossfit gym. These guys have no excuses and are making it happen out of a couple shipping containers and a parking lot with some repurposed gear. Awesome AND eco friendly.

over the years there it has been proven that sports and exercise does not need a special sport specific facility. Just look at the rising sport of parkour/freerunning these guys decided to use the city as a play ground and make a sport of it. And now Crossfit has shown the way to using such places as parking lots to workout and train elite athletes. Crossfit is changing the way we exercise and the way Americans view exercise. I say rock on crossfit!!!

And here I thought I was the only guy not in a box.... Just kidding!