00:26 With a little more than a week to go until the CrossFit Games, Justin began the show by reading this list of equipment now on site at The Ranch in Aromas, California and available for workouts: 15,000 pounds of bumper plates, 30 rowing machines, 50 barbells, 40 plyo boxes, 50 medicine balls, 12 GHDs, 50 sets of dumbbells, 15 squat/press stands, 25 sets of rings, 50 sandbags, 60 kettlebells, 50 jump ropes and 20 sets of parallettes. Justin wondered what it all meant.

03:45 Justin’s first guest, Jeremy Thiel, placed third at last year’s Games but isn’t sure what to expect this year. Jeremy said the much larger crowds at this year’s Games might change the atmosphere for the athletes. He speculated that the mental game might become more important as athletes try to tune out distractions. Jeremy discussed his preparations, including a recent switch to the paleo diet. Jeremy also spoke about the programs offered at his affiliate, CrossFit Central in Austin, Texas.

28:45 On The Insider Report, Justin said that all competitors at the Games will be required to give urine samples. The samples will be analyzed for performance-enhancing substances at a cost of well over $20,000. Positive tests will erase an athlete’s placing and result in the forfeiture of any prizes.

31:43 Justin’s second guest was Daniel Chase , a high school teacher who has brought a CrossFit approach into his Math classes. Inspired by an article in The CrossFit Journal, Daniel has increased test scores by using Math WODs and competitions based on the CrossFit Games. His students are now excited by Algebra. 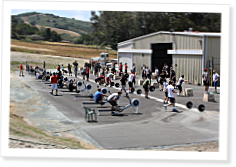 I'm guessing a Filthy Fifty. Or a FGB. Or maybe some as many seconds has possible L-sits.

Dan-
I'm so proud of you!! What you have done with an entire school of kids is just amazing! It's really neat to see kids genuinely excited about math!

More often than not, people tell me about how bad their HS Algebra teacher was, that they don't remember much of the actual math, and you can hear in their voice that math can be intimidating. The impact of what you all are doing at your school is really tremendous! Your students are going to grow up and remember how much fun they had in math class in high school and more importantly, that math isn't anything to be feared. What's even more exciting is that you saw tremendous growth in your students in just one semester...just think of what can happen after four years! WOW!! I get pretty fired up just thinking about it!

As CrossFitters, we all know what it means to soar, to push to the very edge and get to see just how hard, fast and far we can go - isn't that when you feel MOST alive?? The very, very best part of integrating CrossFit methodologies into a classroom or your workplace or wherever is you get to show non-CrossFitters what it's like to succeed and really fly.

Good work Dan! Let's see what we can do this school year!

My guess is that the sandbags are responsible for the never-before-seen exercise. I think the parallettes are for full ROM handstand pushups. However, some gymnastics moves on the rings/parallettes would be unexpected and cool.

Towards the end of his interview Thiel mentions the "OPT Transition." I went to OPT's YouTube channel (OOPPTT) to look it up as Thiel suggests, and couldn't pull up anything.

Anyone have better luck / know what he's talking about?

Thiel emailed me directly (thanks!) so figured I'd share with you all:

"
Watch opt walk back and forth between sets. He is not in a hurry but consistent looks strong and keeps going.

http://www.youtube.com/watch?v=7ChNUlPu7DA
"
Link is WFS *IF YOU HAVE THE VOLUME DOWN* song in the background has some expletives