As preparation for the 2009 CrossFit Games continues, Mike Warkentin takes you behind the scenes at The Ranch in Aromas, California.

The list of gear presently at The Ranch includes just about every piece of equipment you’ll ever see in a CrossFit WOD—and it’s all available for use during the 2009 CrossFit Games. The workouts themselves are still a closely guarded secret, but it’s clear that organizers will not be limited by gear when programming the WODs that will challenge the world’s fittest athletes.

The Ranch itself has been modified for this year’s event—to the tune of about $95,000. The main competition area was paved in May and June to offer athletes more stable footing, and the hill around the competition area has been re-graded. New to the event will be a JumboTron, which was added to the list after CrossFit Games Director Dave Castro saw one in use at the Hell’s Half Acre Regional Qualifier in Texas in early May.

The Games promise to be a multimedia extravaganza, with four video teams and seven still photographers documenting the events from every angle. An incredible 60 terabytes of hard-drive space will be at the Games site to accommodate the IT requirements of the media teams and event staff. Verizon and AT&T plan to increase network capacity in the area for the duration of the competition, allowing CrossFitters around the world to access instant updates that will be uploaded after the scores from each event are compiled.

The staff of the CrossFit Journal will be at the Games producing constant updates and reports. You can follow all the action online on the 2009 CrossFit Games website. 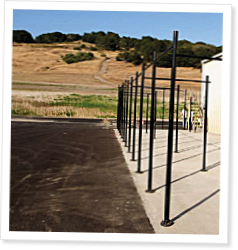 Over the course of the CrossFit Games, media teams took 100,000 photos… Continue Reading

The Quick and the Deadlifts

At the CrossFit Games, 16 men completed the entire Event 2 deadlift ladder, creating a log-jam at the top of the standings. Mike Warkentin interviews Tony Budding of CrossFit HQ to… Continue Reading

The contest to decide the World's Fittest Man and Woman began three seconds after the American national anthem ended.

Great teaser. It's getting hard to sleep already. Can't wait.

When are the events announced?

Anyone know if the equipment from the Games is sold at discount afterwards? (Devilish grin...rubbing hands together...)

AH!! This article makes me wish I could travel to Aromas SO BAD!!! It's going to be fantastic. I think I'll spend the entire weekend on my computer checking for updates.

Any idea of the exact dimensions and composition of the flooring from Regopol? Looking into it at the moment and wondering what sort of thickness Coach went for.

Dear Mike Warkentin, could you be a bit more specific on the equipment list? I'm curious as to what type of bumper plates are being used, which model rower, which barbell, etc. Thanks!

Sorry for the delayed response.

I just checked out the gear:

Kraiburg bumpers - lots of 'em.
Greg Hammond from Concept2 confirms the rowers are Model D's.
The flooring looks to be about 1/2-inch or 3/8 inc.