How to Teach the Press Progression by Mark Rippetoe - CrossFit Journal

Mark Rippetoe demonstrates how to teach the press progression with a woman who has never before done the lift. This footage is taken from a Basic Barbell Certification Seminar held on February 14, 2009 at CrossFit Brand X in Ramona, CA.

Since there is no unweighted version of the press progression, coaches should have their trainees start with light weights. The thumbs should always be around the bar. A common mistake is to bring the bar over the front of the head instead of where it belongs: over the shoulders. There should be a vertical relationship between the bar and the scapula.

Coaches should activate lifters’ shoulders by pulling them up into a shrug. They should teach their trainees to move the bar up in a straight line and then get under it.

Weak abs can result in missed presses at heavier weights. It’s something many people need to work on. 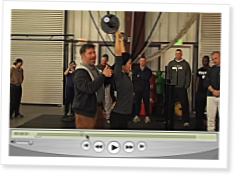 What constitutes good form for barbell lifts is not a matter of opinion or up for debate, argues lifting coach Mark Rippetoe. Rather, proper mechanics are about… Continue Reading

The Squat: All About Hips and Knees

Coach Mark Rippetoe discusses the importance of the hips, knees, stance and muscle mass in the squat. The footage taken from his Basic Barbell Certification seminar at CrossFit Brand X in… Continue Reading

3 Comments on “How to Teach the Press Progression ”

Thanks Rip, you are extremely helpfull amongst the mass of silly bullshitters in the world. My own boss who is AFAA certifide and Navy Fitness certified, was floored to realize the relation of the traps, feet and scapulae. Also in the squatting videos, the back angle and adductors role in hip extension. I work at Naval Station Great Lakes and i have to say that your principles and crossfit in general is helping me "off the radar" fix the out of standard people and misinformed lifters. THANK YOU SO MUCH!

Useful to be reminded of some of the less obvious reasons I miss a heavy press!! Thanks Dr. Rippetoe