CrossFitters are not shy when it comes to rowing. They work hard. But many focus too much on the monitor and too little on the technique of maximizing stroke length that leads to faster times.

In the first in a series of instructional videos, Chris Wilson of Concept 2, a former Olympic coach, shows Jon Gilson of Again Faster how to row faster. Like many CrossFitters, Jon brings a weightlifting approach to his body position in the rower. His chest is up, his back is stiff, and he arches his lower lumbar. Chris points out this position is far from ideal for rowing. Jon relaxes the erector series in his back and relies more on core strength to maintain his position. He slides two inches forward and increases the length of his stroke. The coaching point: greater efficiency in stroke length sets rowers up well to use increased power. Relying on power alone is not the best approach. In all, there are three factors that lead to faster times: stroke length, stroke power and stroke rate.

In future episodes of this five-part series, Jon is coached through a variety of skills and drills that make him a much better rower. In the final episode, he transitions from rowing in the erg to rowing on the water in a one-person scull. 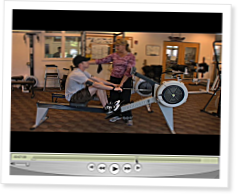 Rowing Lesson 4: Putting It Into Practice

In the third of four Concept 2 rowing lessons with former Olympic coach Chris Wilson, Jon Gilson of Again Faster learns about the importance of the preparation phase of the… Continue Reading

In the final part of our rowing series with former Olympic coach Chris Wilson of Concept2, Jon Gilson of Again Faster learns that drills can be frustrating because they force an issue… Continue Reading

Rowing Lesson 2: All About The Feet

Maintaining pressure on the foot stretcher of the Concept2 erg with the upper portion of the foot is crucial, Jon Gilson of Again Faster learns in part two of our five-part… Continue Reading

Bruce Kocher is a master rower instructor for Concept 2 (when he’s not flying 767s internationally for Delta). He recently attended a CrossFit Level 1 certification seminar at Rogue Fitness… Continue Reading

As a newbie crossfitter ( and former bodybuilder) this video hits home.I definitely have a ways to go,but this is an excellent teaching video,I highly recommend it.

I love these great instructional videos, but the Journal can be such a tease sometimes -5 part series?

If you want tons more info, go to a C2 rowing seminar.

Wow! I implemented the changes Chris advised in the video and they have made a huge difference to my rowing performance. I'm looking forward to seeing the improvement in my times. Fantastic.

I filmed my rowing for the first time yesterday. I noticed I do everything wrong. I thought I had it right, but no. This instructional video will help me a lot, thanks!