Getting the Most From the C2 Rower, Part 2 by Peter Dreissigacker - CrossFit Journal

Getting the Most From the C2 Rower, Part 2

The complex relationship between power output and stroke rate is poorly understood by many athletes new to the Concept 2 rower, the company’s co-founder tells Jon Gilson of Again Faster in the second part of our three part series. Peter Dreissigacker takes Jon through a drill used to acquaint athletes with the machine. Going faster doesn’t always mean going harder. And rowing many strokes doesn’t necessarily get your heart rate up.

Near the end of the workout, Jon says he feels like he’s been “run over by a truck.” Once the maximum power output has been reached, his heart rate is slow to come down. Regardless of the stroke rate and power output, pulling harder will result in a tougher workout.

Jon and Peter conclude by reviewing log card results to show how rowing intervals with varying stroke rates and power outputs can be an effective training technique. 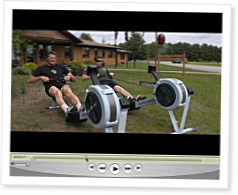 Getting the Most From the C2 Rower, Part 1

Getting the Most from the C2 Rower, Part 3

As our rowing series continues, Jon Gilson of Again Faster gets the first of three explanations on how to maximize the training capacity of the C2 rower from a man who ought… Continue Reading

In the third and final part of his series, Concept 2 co-founder Peter Dreissigacker focuses on damper settings. He tells Jon Gilson of Again Faster that athletes who think… Continue Reading

Row Fast: How to Prepare for an Erg Test

Competition is an incredible motivator. But even when the on-water season is over and rowing moves indoors for the winter, there are plenty of opportunities for… Continue Reading

People often ask us at Concept2 what the damper on our rower does and where to set it for the best workout. The damper setting is important, but it does not… Continue Reading

6 Comments on “Getting the Most From the C2 Rower, Part 2”

Jon, I learned my rowing technique from you at my level 1 last fall in Toronto - how has your instruction changed since you had this experience at C2?

I'm sure they're both doing the same thing, but Gilson looks like he's about to rip the handle off that thing. Peter's rowing looks damn near effortless. Crazy. I wonder what his 2k time is.

Scott, thanks for the link. He does make it look easy. I was planning to row in my warm-up tomorrow, so I think I will try the drill from the video. I've not yet paid attention to wattage, so not sure how it will go, but it should be interesting to try.

Well, I'm feeling wimpy now! I tried messing with the wattage this morning. The most I could get at 24 s/m and a damper setting of 4 was 140 watts. I can see this is going to take some practice, but it was definitely educational. Thanks for the videos, Peter!

Alex, I haven't changed my teaching method at the Level I Certifications, although you should know that we just barely scratch the surface of a proper stroke in that environment. We're only attempting to get the basic motor pattern hammered in during that 15 minute rotation.

For a much more in-depth look, I'd highly recommend a two-day Rowing Certification. The next one is in Boston in September.

If you re-watch the video, you'll see I'm making two mistakes common to CrossFitters: I open my hip angle slightly at the outset of the drive, which manifests as a lifting of the shoulders and firing of the traps. This serves no purpose other than to blunt hip drive--it's a minor core-to-extremity violation. You'll also see me slamming the handle into my abdomen rather than maintaining perpetual motion. I should be making a small circle at the finish rather than disrupting my timing with the impact.

The folks at C2, including Peter, as well as Chris Wilson and Judy Geer, and Master Instructor Angela Hart have taught me a ton of information, most of which becomes crystal clear the second you leave the Erg and attempt on-water rowing. Now when I get on the Erg, I have an entirely different outlook. Rowing is about timing, balance, and control, not merely "gripping and ripping".

Thanks for the question, Brother!