Mike Warkentin reports that a Finnish firefighter and a Pennsylvania phys. ed. teacher are the Fittest Man and Fittest Woman in the world.

Mikko Salo and Tanya Wagner are the 2009 CrossFit Games champions.

Both athletes showed an incredible amount of skill and tenacity during the two-day event that included virtually every CrossFit movement. Muscle-ups, double-unders, handstand push-ups, Olympic lifts and a vicious trail run were but a few of the challenges the athletes faced, and Salo and Wagner proved they were the class of an elite international field.

“I’m happy. I’m really happy now,” Salo said after his win. “It has been a very, very hard couple of days.”

Tommy Hackenbruck, who got to the Games via the Last Chance Qualifier, was second, and Moe Kelsey was third.

On the female side, Tanya Wagner of Pennsylvania improved on her second-place finish last year by taking the 2009 crown. Wagner claimed the overall title with a consistent performance across the board. All told, Wagner only finished out of the top 10 in one event.

“This is a dream,” she said. “Last year was so awesome, but it was a different feeling than it is this year. This year is just awesome.”

At the ceremony after the competition, Jolie Gentry was given the Military/LEO Award, and Jason Khalipa was given the Spirit of the Games Award after finishing almost last in the run but then clawing his way back to fifth. Aside from his poor placing in the first WOD, Khalipa placed first in two events and finished second in the last three. 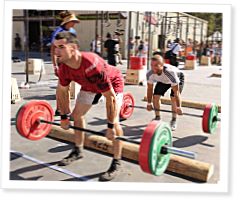 The Quick and the Deadlifts

Over the course of the CrossFit Games, media teams took 100,000 photos… Continue Reading

At the CrossFit Games, 16 men completed the entire Event 2 deadlift ladder, creating a log-jam at the top of the standings. Mike Warkentin interviews Tony Budding of CrossFit HQ to… Continue Reading

Any mention about Commando Steve Willis?

Absolutely amazed at the performances of all the athletes. Truly inspirational.

Tanya's consistency is absolutely mindblowing to me. She finished in the top 10 in every WOD, that's truly a dominating performance! I don't know what they're doing at Crossfit Apex, but I have a feeling that a lot more people will be following their WODs on the internet after this weekend. Congrats Tanya and Mikko!

I still can't believe Khalipa didn't finish higher considering his stellar performances in the other events. Two silvers and 3 bronzes ain't too shabby for those incredibly challenging WODs. I know that his time in the first event knocked him down the ranks, but I still wonder what the outcome would have been had the WODs been in different order and everything else remained the same. I guess it's just a case of what comes out of the hopper at the time.

You are absolutely right. It IS the whole point of what comes out of the hopper.

The workouts were ideal and just right.

I ask myself: Were the 10 elements of fitness present and equally represented in the overall slate of WODs? The answer is undoubtedly yes. And to be quite frank it does not matter in what order they go, my point being this:

Each individual exercise in and of itself can be done to a maximum effort, but when you start to pair and order combinations of movements, that is when real fitness is tested, measured and achieved.

I did a workout today with double unders in it. I was excited because I am getting better at double unders. Burpees however were first. I did not think it would be as challenging as it was. The double unders were a lot slower than I expected. Again, double unders by themselves, no problem; double unders (50 of them) with burpees in front (25) for 4 rounds; much bigger problem. I got 17:14 (I am sure many people could do this workout right now and go faster). It just goes to show that Crossfit tests not only the ability to do an exercise..but the ability to do an exercise after a challenging exercise when considerably less is left in the tank. For that reason, I applaud the WOD selection for the Games.

This WOD would be interesting: Girl WOD Gauntlet. Girls Gone CROSSFIT: Annie, Christine 300lb DL, Fran (standard), Grace (standard), Isabel (standard), Nancy (standard) all in one shot. Whatever, just keep the variety coming Coach Glassman. One of the attractions to Crossfit is the daily commitment to doing something that I may have never done before in a particular combination. I think the Games selects its champion and it did so without fail this year. Congrats to Mikko and Tanya Wagner.

Props to the Pacific Northwest Region this year for totally representing at the games!

Congratulations to Mikko and Tanya from CrossFit Briga (Central America)
Definitly both of them had an excellent performance and Iam sure they specialize in not specializing.
You should be able to perform GOOD in any aspects of the exercises spectrum
Greetings to all the competitors also, and the organizers and volunteers.
Oydén

PS. Everyone of us CrossFitters have to keep spreading CrossFit across the world, it could be a better place to live.

I think the day 1 scores for the top 16 should have been re-ranked in a 1-16 rank ordering for final scoring. People who did poorly (relatively speaking)) on any one of the day 1 events were unduly penalized.

On the first event of the games, Jason finished last of the eventual top 16 and would have had a 16 if this were a day 2 event, instead he carried a 72. Salo finished near the bottom of the snatch, yet came away with only an 11. That number would have been much higher if the snatch had been a day 1 activity.

I was surprised that Jason was at the top when I re-did the numbers.

Kaleb, you say "Salo finished bottom of the snatch yet only got an 11" - but Mikko was only competing against the other elite 15 guys in that event....so why should that count the same as finishing bottom of any event when there were 70-odd competitors? There are always going to be different ways of scoring, but I don't see merit in your suggestion.

I have nothing but admiration for everyone who competed. I will never have that kind of fitness. But I'd like anyone posting "alternative results" for a competition which has had its winners crowned, to bear in mind the superhuman efforts required by those who took glory in the men, womens' and affiliates competitions to earn their titles. Let's show some admiration and respect for our CF Games champions, folks.

Shane, I don't feel that talking about different ways of scoring and the alternative results denigrates the accomplishments of the athletes at all. I have nothing but respect for the accomplishments of any of the firebreathers, or anyone CF-er for that matter. I couldn't have qualified for the games, but I am more fit because of my involvement in CF.

I don't think CF is so brittle or closed that it can't stand some discussion about scoring methodologies. Likewise, I doubt any of the top finishers will have their feelings hurt. I agree that there will always be different ways of scoring. I think this is healthy. I expect the scoring to improve over time with experience, in a very CF kind of way. I like this years scoring better than last. Last years scoring limited the types of events that could be held. This year each event had similar weighting (assuming the same number of participants) for diverse modalities and time domains. We could have strength events and mix up long and short metacon workouts.

My observation was that different effective weighting for the different days (due to the reduced number of participants) put a premium on top finished in day 1. Going into day 2, three competitors (Wickham, M. FitzGerald and Thiel) were mathematically eliminated from first place (well, Thiel could have made it on tie breakers if he placed 1st in all three day 2 events and Hackenbruck, day 1 leader, took last in all three). If day 1 servers as a bottle neck, or eliminator, heck, maybe we should treat it as such and start the top 16 back at 0 for day 2.

There's a thread in the Competition section of the message board about the Games scoring method where we've been discussing standard deviation, SD-like scoring methods as well as alternatives. There are trade-offs in all scoring system between ease of understanding and explaining, comparing different time and modal results, and being able to give out "what if" scenarios to determine if someone will win. It wouldn't be a bad start to list out the criteria for evaluating a scoring method.

Someone sent me a spreadsheet with the men's results calculated with their cumulative standard deviations. In this method, Mikko still had a better set of performances over the field than Jason. Tommy was third, Pat Burke fourth. Even when we compare the top 16 to each other with their SDs we get the same result.

Something I would love to see is a "weight X distance moved" calculation for all of the competitors. NOT for it to be used in scoring, just so those of us back home doing a little hero worship can get into some more "discussions". : )