Sights of the Games by Mike Warkentin - CrossFit Journal

Over the course of the CrossFit Games, media teams took 100,000 photos and recorded hours of video footage. But the camera doesn’t always catch everything. Sights of the Games is a compilation of some of the best behind-the-scenes moments from three days of total fitness chaos.

Which CrossFit celebrities were on hand to witness the Games?

How did Tommy Hackenbruck and Michael (Bro-PT) FitzGerald manage to wield the sledgehammer with such skill?

Which competitor tried to compete with surgically repaired foot?

Who learned new movements only minutes before performing them during WODs?

Which second-place finisher from a previous Games competition led an Affiliate Cup team to the top five?

Why would Carmen Electra find CrossFit Bogota in Colombia to her liking? 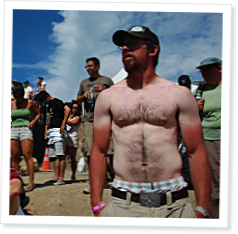 The Sport of Fitness: Canada West

6 Comments on “Sights of the Games”

That's my boyfriend, Ben! Nope that's NOT a white t-shirt....we're from Montana :)

Kind of bummed theres no pics of Libby lol

They played a song that had 'you're gonna get what you deserve' in the chorus, anybody know who/what that was? thanks, and lets all go train in Bogota.

Ken, I think that was Head Like a Hole by Nine Inch Nails. Slightly different version here http://www.youtube.com/watch?v=l3iM87iIbnQ&feature=PlayList&p=6D16A9AE434CF354&index=0

Great article, I laughed out loud more than a few times. What a way to start my morning.

Just to clarify, CrossFit Calgary came 4th (I would take 3rd if I could) and both Brett and James run CFC with Brett doing the majority of the programming.