In this video by CrossFit By Overload, Coach Mike Burgener tells Tony Budding that every coach has to look for three components in every lift: stance, grip and position. Coach Burgener goes on to illustrate the point in a session on snatching from the mid-thigh with two of the top contenders in the 2009 Games: Jason Khalipa and Jocelyn Forest.

Jocelyn has been CrossFitting for less than a year, but has great speed. Coach Burgener says the goal of the elbows high and outside drill is to ensure the bar is kept close to the body in the actual lift. The bar should be pulled down and into an overhead squat position. The shoulders lead and the arms follow. It’s also important to stay over the bar as long as you can before the jump.

“Position is everything for you,” Coach Burgener tells Jason Khalipa. He uses the cue “shoulders finish” several times to get Jason to properly pull himself into the squat. 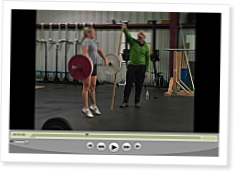 Fixing the Feet With Mike Burgener

How do you fine-tune an elite athlete to reach even more potential? Olympic-lifting coach Mike Burgener trains Danny Nichols of TJ’s Gym in San Rafael on the finer points of snatch… Continue Reading

Olympic lifters and CrossFitters around the world would gladly do 10 rounds of Fight Gone Bad for an opportunity to work one-on-one with Olympic lifting coach Mike Burgener. At a… Continue Reading

Would you trade 2 minutes 38 seconds a day for a few PRs in the snatch or the clean and jerk?

If you would, then you need to start doing the Burgener Warm-Up and the… Continue Reading

Phenomenal video. Burgener's coaching experience and his cues are an invaluable resource. Thank you Crossfit and Coach Burgener for the excellent content.

Special thanks to Coach Burgener for all his expertise and willingness to share it with others.