By Jimmy Baker and Joe Izzo

Jimmy Baker of CrossFit Santa Cruz Central was trained personally by Coach Greg Glassman for six years. He is a retired school principal who now specializes in training older athletes, many of whom are de-conditioned or have medical issues.

This video, the first of two parts, tells the story of Joe Izzo. Joe is one of Jimmy’s former teachers at a school for foster and homeless children. Joe is now one of Jimmy’s personal training clients. Just eight months prior to his interview, Joe had been dying of transitional cell carcinoma. At age 58, Joe had been in a hospice. Radiation and chemotherapy had taken their toll. Joe said he was “all skin and bones” and weighed just 135 pounds. He came back from death and was released form the hospice but says “it’s been a real adventure.”

At first, Joe was so weak he could not do a single sit-up. He found this tough to cope with since he is a life-long athlete who loves to surf. But he has since made real progress, guided by Jimmy. And, like other CrossFitters, he gets a lot of stares when he works out in a Globo Gym. The video concludes with Jimmy taking Joe through a series of lunges. 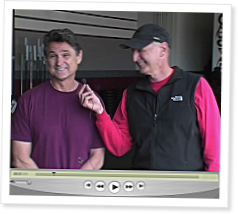 By Jimmy Baker and Joe Izzo

By Marissa Lelogeais and Amy Ferro

“CrossFit is really the way to go for someone who comes back from cancer,” Joe Izzo says in the second and final part of our series. Joe’s trainer is Jimmy Baker of CrossFit… Continue Reading

“If she can do it, you can do it,” trainer Amy Ferro says of athlete Marissa Lelogeais. Marissa is a CrossFitter at CrossFit Southie in Boston, Mass., who has cerebral palsy and a visual… Continue Reading

Jimmy Baker is 61, and has been training CrossFit for over a decade. He is a co-owner of CrossFit Santa Cruz Central. His youngest client is in her mid-fifties, and his oldest is… Continue Reading

This is the first part of a complete training session that Vilma Siebers, 81, had with Jim Baker at CrossFit Santa Cruz Central, where he is a trainer and co-owner.

5 Comments on “CrossFit After Cancer ”

Very inspirational! Makes our worries of PR increases and/or decreases seem so trivial. Jim is obviously a great trainer. I'll be using some of his drills tomorrow for our warm ups.

Please keep up these different population contributions to the journal. Excellent!

My best friend was recently diagnosed with a brain tumor. After removing it he has been going through radiation and chemo for the last 6 weeks. In the middle of the radiation, he asked me about starting CrossFit. For the last 3 weeks he has been working out after radiation sessions. He is definitely a fighter.

For now, he is scaling down and progressing slowly, but each day he feels stronger and ready for more. People like Joe and my friend are a special breed.

This is such a great story. CrossFit's principles and exercises really can be applied to any age group. It's not only for fire responders and 20 year olds... it's for the rest of us too. Congratulations to Joe for your hard work, perseverance, and amazing rehab. Keep it up! And Jimmy - you are so encouraging and gentle in your coaching. Both of you are great role models.

Your friend is not only a brave fighter, he is also very intuitive about what his body needs.

Many people simply endure the post-operative period and their long and miserable weeks with chemotherapy. The fatigue, nausea, vomiting is certainly hard to bear and leads to physical disability. However, the benefits of endurance exercise in this situation are very encouraging.

A recent study by Karen Wonders and colleagues(1)demonstrated that an acute endurance exercise bout performed 24 hours before chemotherapy protected against cardiac dysfunction, an unfortunate side-effect of a couple of the chemotherapy drugs.

Clinical trials are in progress testing the benefits of incorporating endurance exercise into the treatment for post-operative patients undergoing chemotherapy, in this case for breast cancer.

There is no reason for patients to wait on these trials. The benefits to the entire body, especially to the heart and its endothelium, microcirculation, and recuperative powers are already established.

He mentioned some of the same things when he first approached me about it. He wanted to make sure he exercised and ate well.

Cancer is just an obstacle for him, not a death notice. It was very sad taking him to a radiation appointment because there were a lot of people there that just seemed to accept their deal and just do nothing. I felt really bad. Now, I have never been in that position, so I can't judge them...but, I have to think that this type of approach has to be a better way to fight.