Introducing The Back Lever by Jeff Tucker - CrossFit Journal

Introducing The Back Lever

“This is the about the simplest, most bastardized way I can teach you this movement,” Jeff Tucker says of his scaled version of the back lever. On a visit to CrossFit Santa Cruz Central, Jeff gives athletes a taste of the back lever when they hold on to the gymnastics rings in the tuck position. They don’t have a full load because they are not fully extended.

But it’s still important that everything be active and tight. Legs should be engaged and pointed to the sky. That’s because athletes are upside down and under a big load. “We want to control that load. We want to baby step into this,” Jeff says. There should be double spotters and athletes should “absolutely” ask for help. Mental preparation is also important.

Among the cues Jeff uses are: “Over the hips,” “stay tucked,” “commit to the movement,” “look at the horizon,” “look at your stomach,” and “chin on your chest.” Near the end of the movement, the quads should pull away from the chest. The athlete should look up and the back angle should change. 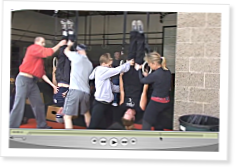 Gymnastics, as Coach Glassman says, "has no peer among training modalities" for developing the four neurological components of the ten physical skills that comprise real… Continue Reading

5 Comments on “Introducing The Back Lever”

Tucker... you have been on fire lately with these videos!!!

First what I like to call THE BEST kipping pullup tutorial a couple months back and now THE BEST back level tutorial.

For those of you that haven't made it to a gymnastics cert... I highly recommend it! While these tutorials are the best I have ever seen out on the internet, they are only a taste of the info you receive at the cert itself.

Keep it up Tucker! Can't wait to work with you again soon!

Tuck, you ever read Coach Sommer's article about 60s of statics before?

But I would like to read Sommers article - where can I find it?

Great video! I'm always glad to see gymnastics movements being used for training purposes. I used to compete in gymnastics back in the 60s. I was impressed then, as I am now, how much strength and coordination gymnastics produces.

When watching the portion of this video when the two women were spotting the person attempting his back lever I was reminded of all the hard work we used to put in training ourselves and coaches to be good spotters. Injured people can't train. Sometimes good spotting needs a bit of mind reading or psychic ability to determine what each person is going to do, what's their weakest point, how they would mostly likely fail, and what the result of that would be. One of the things I remember happening to beginners is when they started concentrating on a move, tightening body parts, moving through different planes of motion, etc. is that they sometimes just forget to hold on to the rings (or high bar, parallels, etc.) and let go. We always asked the spotters to hold one hand over their hands on the rings so that letting go wasn't an option. If you're lucky enough to have two spotters, if one spotter keeps a hand cover, the person is still safe for the move and if he/she lets go with the other hand they may twist and swing a little but they won't face plant. Keep up the good work!!

Hey Tuck. This was one of his first articles on Dragondoor years ago.

I think all the issues have been settled out with his store on Gymnasticbodies.com

...well, I was emailed that they were.

There was another on DD about the Hanging Leg Lift and another on T-Nation or some other Bodybuilding website regarding working cross progressions with DumbBells. Besides the ones offered on GymnasticBodies.com