One Hundred Miles of Trials by Shane Skowron - CrossFit Journal

One Hundred Miles of Trials

Shane Skowron describes how he became the youngest finisher in a 100 mile race, and Brian MacKenzie and Carl Borg of CrossFit Endurance explain what they think it means.

During my training in the months leading to the race, I used CrossFit Endurance methodology and I seldom ran more than five kilometers at a time. I averaged about 20 miles a week. Prior to the VT 100, my longest run was a single 50 mile race.

In retrospect, I believe I was prepared for the distance I attempted. My finish is proof. At no point during the run did my muscles or joints fail me.

I will continue to follow a similar plan for any future endurance events I attempt because I am pleased that CrossFit and CrossFit Endurance enabled me to meet my goal. Because I now have more experience training for, tapering for and running ultramarathons, I expect to see significant improvements in the future. 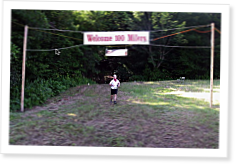 By Brian MacKenzie and Piper Denlringer

Endurance athletes and CrossFitters alike are finding success with the CrossFit Endurance program as they train in ways that were once thought to be useless for long-distance athletes.

At this Endurance… Continue Reading

To find the key poses of the movement, Romanov says you use the common denominator… Continue Reading

16 Comments on “One Hundred Miles of Trials”

Congrats to Shane! I followed your training and race results on your blog over the last few weeks - thanks for putting it out there. Completed my first ultra last weekend, the "Howl at the Moon 8 Hour", using CrossFit and CrossFit Endurance inspired interval training. My longest run prior to the event was 3.5 hours. Goal was 35 miles and finished with 31.11. Had a heat/humidity spike after weeks of mild temps. Otherwise, I'm certain I would have achieved my goal. Like Shane, I'm 100% convinced that CF and CFE are great vehicles to competing in ultra marathons with limited time spent... well... running! Way to go dude! Good luck with your future ultras and getting into the SEAL program. If interested, you can read about my race on my blog: www.btwg.blogspot.com.

Congrats! I'm one of those people that still haven't completely absorbed the CFE approach, but clearly, you and others are proving it's a solid way to train. This is inspiring and it's relieving to know that the endless miles of training need not be in one's future if they want to do an ultra.

Looking forward to reading about your next successes!

Right on Shane! Thanks for sharing your story. I'm a student of CF and workout 6 times per week. Your story caught my interest and directed to me to the CF Endurance site. I feel like I've just discovered a new exciting chapter of this awesome adventure! Stay strong dude! I'll be watching for your progress and hoping to learn more from you as you grow in CF. You're an inspiration.

Congrats! and this is f*in' awesome!

great job, just shows that crossfit really does have carry over to everything.

Congrats, Shane! Thank you for the great article and insight into your training.

All the best in the future,
Brendon Mahoney

Congratulations, Shane! you have shown the mental toughness and intelligence required for high speed units. Good luck with your pursuit into the Navy Seals. Keep up the training and racing.

Great job, Shane! I had commo'd with you on the ultra list about this and it is great that I also see it on the CF Journal! Keep kicking ass!

I can attest to the value of Crossfit-type training in running ultras. I finished my first 100-miler, The Heartland 100, last October in less than 22 hours and truly very little long training run. I am convinced my overall strength and particularly the increased core strength were of overwhelming benefit. No one believes me when I tell them I didn't really "train" for a 100-miler and yet finished easily. Thanks to Shane there will be a lot more believers out there! Strong work and congrats!

If you're out there, please elaborate on your comments regarding shoes. The "five fingers" seem to be gaining in popularity in the community as they attempt to capture the benefits of barefoot running, while other more basic designs include "Chuck's" and Samba's. Do DC's offer an advantage over All-Star's and Samba's and do you think 5-Fingers fall short of their goals?

Your insight is greatly appreciated and your videos are always informative and entertaining.

Great article Shane. I love the fact that you did your training without attending a crossfit Gym or cert - just absorbed all the knowledge that is out there. There is no doubt you'll improve dramatically on your next one!

Shane! You are a beast my friend. Great job on your 100 mile run! That is simply AWESOME!

Phenomenal job Shane! I have yet to take a look at the blog but from what I can tell it's a wealth of info. I too plan on being a SEAL officer after college.

Btw, I've done some sleep-deprivation training(bit of an insomniac) and it's a thousand times harder than CF with sleep. Especially when you do Fran or Nancy.

Great job Shane,
I have long been a fan of your creativity in programming and application of training principles and theory.

Best of luck to you in your journey towards a career in Naval Special Warfare. The internal growth that resulted from your drive to challenge yourself with this race, especially the disciplined training that saw you through to the finish, will be of great benefit to you in realizing your goal.

I applaud your honest evaluation of not only what you did right, but the things that went wrong, and the lessons you learned from them. There is a lesson in everything.