To a CrossFitter, 10 seconds might be five or six breaths of rest, three hard pulls on the C2, a few quick steps in a hill run or a couple of unbroken reps. To Heather Keenan of CrossFit New England, 10 seconds was all of those things—and it was also the slim margin by which she missed the Top 16 at the 2009 CrossFit Games.

Miss it by a minute? That’s a lot of ground to make up. But 10 seconds? That’s fuel for a year’s worth of regrets and second guesses. “Ten seconds—that’s like every CrossFitter’s nightmare come true. It’s one break,” Keenan says.

Months later, Keenan is still having nightmares, but she’s now using them as motivation.

“It’s good for me because it makes me push harder. It makes me feel like every workout I do is Saturday’s chipper event. It makes me feel like if I put this bar down one more time, that’s the spot I lost. I think about it every day, every time I train, every night when I can’t sleep. It’s always there, and I don’t know when it’s going to go away.”

In this video by Again Faster, Keenan describes her experiences at the 2009 CrossFit Games and what she’s learned from the competition. Additional reading: The Sweet 16 by Mike Warkentin, published July 22, 2009. 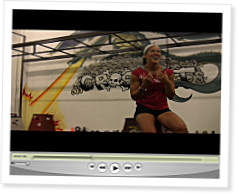 Heather Keenan, 32, is a trainer at CrossFit New England, the strength and conditioning coach at Nobles School, a mom to two kids (Maya 8 and Jonah 4), and an aspiring 2009 … Continue Reading

Heather Keenan, 32, is a trainer at CrossFit New England, the strength and conditioning coach at Nobles School, a mom to two kids (Maya 8 and Jonah 4), and an aspiring 2009 CrossFit… Continue Reading

Planning for the Open

By Karianne Dickson and Gregg Arsenuk

“If you’d asked me right in the middle of it, I might have said, ‘I’m quitting CrossFit—this is not fun,’ but it was fun,” Leah Polaski says. “If I could go back, I’d do it over again.”

Karianne Dickson, owner of CrossFit Morristown, and Gregg Arsenuk, owner of Guerrilla Fitness/CrossFit Montclair, regularly talk to each other about business. So when the CrossFit Games Open was announced… Continue Reading

Wow Heather - you are being too hard on yourself. I think you ROCK! I so enjoyed watching you workout today at the Throwdown - you are as steady as they come. I can't wait to see you in The Games in 2010!! Congrats on The Games and your upcoming wedding!!

Want to echo Tracy on her first sentence and reinforce what you said about focusing on the positive in your training. Coming from an elite triathlon background I know that the competition is very waring physically and mentally. In addition to being a mom, it can't be your first priority. Yeah, it sucks how your games went down. I also hope that dude was drunk since I can't think of any other reason he might say something like that. BUT, you went. You pushed yourself the best you knew how at the time. It is just like your first triathlon...damn, why did I spend so much time in transition?

Also want to point out that while crossfit is worldwide, we are still such a minority. Your strength, power and will is such a rarity and you need to recognize that for what it is and give yourself a ton of credit.

While the games are super cool and would love to be part of them someday, they aren't everything and they certainly aren't worth losing a ton of sleep over. It is supposed to be fun! Enjoy the ride.

Listening to your heartache, I do not think any words, hugs and kisses, even from your loved ones will soothe your aches. Time will heal, though. I also think your mental anguish is part of the unintentional by-product of the Crossfit program. It is part of the mental toughness training in your Crossfit life. In broad perspective, if this was one of your top three devastating moments in your life, you are one lucky gal.

Thanks for the in-depth and candid interview Heather, I enjoyed listening to your thoughts and perspective.

Heather.........you rocked it at the games. You beat my ass, and I'm sleeping like a baby. You are a great person and a great athlete. Don't be so hard on yourself. Hold your head high, you did exceptionally well. Be proud.

Thanks for your open and honest interview. I enjoyed hearing your perspective. Let me share a small piece of mine. You're an amazing athlete, and you said it best in your interview: you're walking around feeling sorry for yourself, when you don't need to be. Chin up!

The mark of a great competitor is always looking to be better. We'd all think you were crazy if you didn't feel the way you do. Look to channel that energy to future events. Adversity is a great character builder and I think you are an outstanding athlete.
Keep your head up, you did a great job and realize events like this set the way for our attitude in future competitions.

Thank you. You make us wanna-bees push harder. Your awesome, you represent the female crossfitters well. I thought you were great at the games. You have such a strong will you'll come back better. And yet you are very humbled just what crossfit needs.
I think you proved yourself just by qualifying for the games, so be proud.

Heather you are an amazing athlete! I can certainly sympathize with your heartbreaker moment at this year's Games, I have both experienced and watched several such moments in my sport. I know how hard it is and how you just can't help but replay it over and over again. Somehow one has to figure out how to detach from the outcome of the event and to enjoy the process of preparing for it. That was the only way I was able to move on from those heartbreakers and not let them continue to drag me down. I know you will do it - cut yourself a break, revise strategy if needed, and I can't wait to watch you compete again next year!!! Thank you for sharing your experience with us!

Dear Heather, Those other videos were not made in vain! I found them and this one interesting, informative, intelligent and super inspiring. Keep up the great work and I look forward to seeing you in the 2010 games.

Heather your passion and drive has inspired many others including myself. Now when I want to take a breath during a WOD you have me thinking about those precious few seconds and the price that comes with it. Know that you missing the second day has made you into a stronger Crossfitter and person. It has given you a drive you never would have had before. Thanks for becoming stronger, and I hope you see that your new found strength is infecting others.

I feel your pain Heather! I tied for the 3rd of 3 spots to go to games and lost in the tie breaker as well. 10 seconds out as well!

Use this experience to fuel your fire! When your brain tells you to stop, don't stop. It won't hurt that bad to do a couple more.

Great story. Keep working hard and you will reach where you want to be!!

You were my favorite going in and you didn't let me down. Still a big fan!

What a competitor!...Ms. Keenan, I'm looking forward to PLENTY more videos of you leading up to the games next year!

This is good stuff and is endearing to see your spirit come through, thanks for being so transparent.

I have to say, knowing Heather as well as I do, this piece does a great job of showing how honest and real she really is. There is something so natural and likeable about Heather that has nothing to do with her strength and fitness. Thank you for taking the time to interivew her so the world can see what an amazing person she is.