2:14 Jim Baker, is a 62 year old trainer and co-owner of CrossFit Santa Cruz Central, who has specialized in training people that are between the ages of 55 and 87. He talked about his own training as an older athlete and about training others that are older. His clients are looking for independence from caregivers rather than elite fitness. Jim also talked about the early days of CrossFit and what it was like to have Coach Glassman as his trainer. He also talked about how CrossFit has evolved since he started 11 years ago.

24:45 Chuck Carswell is one of the trainers for HQ. He talked about what he foresees CrossFitting through two or three decades will look like. He answered the big question of "Why CrossFit when you're older?" Chuck talked about the older clients he has worked with and how he has helped them meet their goals. He gave instruction, in great detail, as to the proper way to handle a cheat meal. 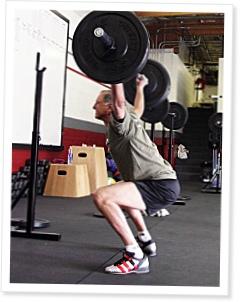 Another great show Justin. Maybe next time you could give us a few hints of what guests/shows/topics are in the pipeline? Also, any chance of checking back with a few guests from your first 20 shows? Would love to hear back from Rip, Freddy C, J Everett, Dutch etc again.

Noted. Great suggestions and thanks. These are the people that I would like to have on the show in the near future: Greg A., Jake Platt, Kurtis Bowler and Rob Orlando, Stonkus brothers, and the Bainbridges.
Please realize that things are subject to change on short notice depending on schedules etc. I am also open to other suggestions from you, the listeners. Thanks again for listening.

I think there could be a shift in the definition of "age" here. Is it the amount of time you've been breathing...or is capacity a more accurate figure (albeit far more detailed to calculate)? I'm almost a decade younger than you guys, but in terms of capacity you guys are more my peers than many of those your same "age". Maybe if we looked at capacity as a bell shaped curve, with weakness/sickness on either end and fitness peaking in the middle, age turns into more of a reference point on the x axis and not much a predictable marker of health.