Staying fit on the frontlines presents unique challenges to soldiers in Iraq. 1st Lt. Matthew Hoff explains how his Panther Recon squadron used ingenuity and the CrossFit Journal to create a special gym near Baghdad.

In the late 1970s, Saddam Hussein purchased a nuclear reactor from France and began to build a power station, which was eventually bombed by the Israeli Air Force. The ruined site sits near the town of Jisr Diyala, southeast of the city of Baghdad. On the other side of one of the 200-foot-tall dirt mounds that separate the ruins from the town is an American combat outpost.

Less than 24 hours after 5th Squadron, 73rd Cavalry Regiment assumed control of the area, the gym facility transformed from a collection of broken cardio equipment and cable machines into a downrange garage gym worthy of those it serves.

The centerpiece of the facility takes the concept of the garage set-up one step further: it’s a rapidly deployable gym. The equipment can be assembled in about the same amount of time as a brand new Swedish living-room set, and the elaborate set of pull-up and dip bars served paratroopers from the squadron at three different bases during our deployment to Iraq.

The garage gym is a CrossFit field of dreams: once it was built, paratroopers flocked to it. While it’s a long way away from qualifying as anything close to an affiliate, it does provide paratroopers with very severe time restraints the means to achieve elite fitness between patrols, meetings and myriad other duties.

The list of CrossFit success stories from the Panther Recon Gym is simply too long for this article. What I can vouch for is that, with a little ingenuity, the line between “austere training environment” and “CrossFit box” can be blurred, making world-class fitness available to everyone—even those living and conducting special combat operations near a blown-up Ba’ath party nuclear reactor. 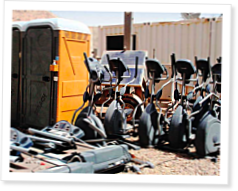 The Story of CrossFit Legacy

The winner of the 2011 Reebok CrossFit Games Open and Central East Regional, Dan Bailey splits his time training at his home gym and at CrossFit Legacy in Barberton, Ohio. Get a peek… Continue Reading

Sandbag training has been around as long as there has been manual labor. Even in our industrial age, luggage, duffels, and those huge bags of dog food, concrete, or… Continue Reading

Glad to see SGM Cockrell and his pipe hitting troopers are doing well. I'm also glad 3-89 could plant the CrossFit seed at FOB Loyalty, wish I could be there to see the new place!! -CPT Dan Broughton 3-89 CAV 4-10 MTN

Awesome to see what can be achieved with a little hard work and ingenuity. Keep up the good work guys and stay safe.

CPT Broughton, thanks for fixing my squat, it has paid off greatly!!! Again, thanks for setting the standard early in our deployment. This thing has taken off since we built the first apperatus.

We now have three going home with us!!! Great work by the welders of the Forward Support Company, and all the guys who helped make this happen for all the Paratroopers and Soldiers within east Baghdad and the Mada'in.

The outdoor facility at Loyalty literally had folks on it day and at night (from all the units within the brigade: 1-505 and 2-505 PIR, Brigade, BSTB,) and numerous civilians and retired military contractors. Once we moved here to COP Cashe South, it is one of the places we show senior leadership as they visit on battle field circulation.

Thanks to 1LT Hoff for showing us novice CFers how to 'get after it'!!! SSG Hodges of C Troop Snipers, and SSG Bernthal of A Troop, both of you are the man, young men!!! CPT Steve Smith for showing us all that you can be in Baghdad one minute leading Paratroopers, and days later compete in the CF Games while on R & R leave!!! That's H-Minus!

Special Thanks to the original "Attack 6", Maj John G. Gibson (75th RGR). If it weren't for you, I'd still be running and doing just a little of this and that. "Faster, Please" is an understatement!! Thanks for smoking my bags the summer of 2006 in Vicenza, 100 pull ups, 100 push ups for time, is much easier now!!

Stay motivated, stay plugged into the fight. If the will is strong, everything is easy- Herb, South Camp, Sinai, Egypt

Great to hear from you, Lt. Matt! It's very inspiring to see what you and your men have pulled off. Keep up the great work. Hope to see you back at CF North
Atlanta sometime!

SGM, you and your boys can check in with me anytime. www.crossfitwoodbridge.com

Great to see the Panthers are hitting the WODs hard and have found a great way to keep your edge. Back in '03 the only thing that really mattered was walking up mountains. I'm sure some CF methodology would have served us well. I only wish I had been exposed to CF when I was back in C/2-505. It sure beats the hell out running down Ardennes and running around the old PT track/SAT area.

Great article! Curious if there might be some ingenuity as it relates to "the hardest part was building the plyoboxes...."

Any of you more engineering types have any ideas to share on how to maybe make that part easier? If wood is hard to come by, how to make a 24" platform that integrates with the pull-up unit or otherwise....

Someone that can think outside the box will come up with something.....

What an excellent article Sir! I've been trying to introduce CF to my company, with some minor success, and I am glad to hear of such an AWESOME thing SGM Cockrell has/is doing for everyone in 5/73rd! I wish we could have something like your box at COP 763!

Once again another unit that had more time and equipment downrange then most of us do back in garrison, and decided to write the journal that it was some austere creation, congrats, I'm jealous, but I fail to see the achievement.