CrossFit South Brooklyn started in a park and ended up in a bathhouse.

In this video shot at a Level 1 Cert held Aug. 8-9, 2009, in New York, CrossFit South Brooklyn owner David Osorio explains how he started training in a park but was forced indoors when the weather turned a few months later. He eventually found space in The Brooklyn Lyceum, a century-old building that used to be a bathhouse.

Osorio believes many potential affiliate owners should balance their enthusiasm for CrossFit with a dose of realism. It’s one thing to love doing CrossFit yourself, but it’s another thing to train others, organize classes, and crunch numbers that have nothing to do with PRs and Fran times.

“Be prepared to spend a lot of sleepless nights working on the affiliate,” he advises.

By preparing for the challenges of owning an affiliate—challenges that go beyond the daily WOD— you can avoid unforeseen difficulties and ensure that your box grows and thrives. 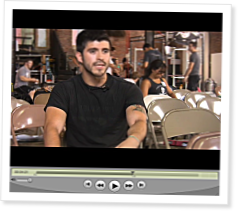 By Jennifer Higgins and Rory McKernan

For under $350, Tony Budding and Rory McKernan traveled to Tuscon, Ariz., on the Southwest Airlines Ding program. While there, they visited Jennifer Higgins and Carl Wells of CrossFit Works, who… Continue Reading

You train harder than anyone else but you still get beat. What gives?

Zach Even-Esh of Underground Strength Coach/CrossFit Underground had that exact experience, and after injuries and a lack of… Continue Reading

“My goal when we came into this facility was ‘how could I create that undiluted CrossFit experience but yet put the things around it that make people feel comfortable?’” says Damon Stewart… Continue Reading

Inside a 25-year-old family sports facility outside Pittsburgh is Integrated Fitness, a CrossFit box that does sport-specific training.

The Bethel Park, Pa., box is more than 3,000 square feet inside a building… Continue Reading

Well i'll go first and say congrats to david (and shane) for coming so far in such a short period of time. In my opinion its well deserved.

David, what an awesome aura the brick-style building provides! You have a great set-up and a great attitude. Thanks for dropping those nuggets of wisdom. I will be trying my hand at opening my own place in the near future.

david rules. and margie too.

Nice video Dave! Great to hear the story of how CFSBK came to be. Had an awesome time at the cert that weekend too! Wasn't it Aug 8th-9th? I think there's a typo in the description above.

Keep up the great work!

Very cogent advice. Take heed, all. The market is unknowable, but people recognize excellence. It's clear that's what Dave is providing in South Brooklyn. Admiring from afar...

This is a "must see" for potential affiliate owners. Well done, David.

We are opening our own affiliate in one week (www.crossfitkinetics.com)and I would agree with everything that was covered in this video. I feel there are essentially three parts of CrossFit. The fitness program, the sport, and the business. The "business" is far different than the other two and needs serious consideration.

David, looks like you have a wonderful box with a great atmosphere. Congratulations on your success.

Great video, congrats on your success. Subtle but very good tips into growing a business from the ground up. Thanks

Without David Osorio, I would not have become a Crossfitter and would not have grown as a person. He runs a great program at CrossFit South Brooklyn.

CFSBK is an amazing place. After a couple years attempting to do WODs on my own I came to David three months pregnant and he helped me modify my workouts and coached me up until I delivered my son. Now the baby hangs out on the mats at the Lyceum while I work out. The sense of community there is just wonderful. Shane, the other main coach, is also a huge part of the sense of family there. I'm so glad to be part of it.

Great advice to all potential CF owners. I can attest to the volume of extra work that goes into running an affiliate. 80 hour work weeks are routine and sometimes the grind seems like it will never end. But then, one of your clients will nail their first muscle-up....and it's all worth it.

Thanks for coming to our challenge, for jumping in and helping all day long, and for sending the pictures. Much appreciated, my friend.

Awesome. I love your website. In fact, we got a big pirate flag because of your awesome pictures!

Amazing story. A journey to be very proud of for sure.

Awesome space and they really are very welcoming - stopped in on a business trip earlier this year and they were very nice and very knowledgeable.

It's been my great pleasure to work with/for David for the last year and a half as a trainer at Crossfit South Brooklyn. His maturity, intelligence, patience and passion belie his 24 years. It has been an honor to grow under his tutelage and to see what he has achieved slowly but surely over the last couple of years. Not once has he compromised his idea of what quality training entails or what kind of community/culture he wants to create at South Brooklyn. Through all it's phases David's voice and vision has been a consistent through-line and we owe our success as an affiliate to that. I couldn't have a better friend, co-worker and boss to share this great adventure with. Wishing all affiliate owners past, present and future the same sort of success and urge them to focus on providing the best quality training and an open supportive community. The rest seems to just come.

Crossfit South Brooklyn is a great place. I came all the way from Israel to took my level 1 cert on last April. The old building has an unique character and gives a real tough crossfit atmophere. I love the place and the people of CFSBK!

Congratulations to David and all of CFSBK. Whenever I get the chance to visit your community, I'm impressed with the positive energy you all have. Keep up the great work!