More Pop at the Top by Bill Starr - CrossFit Journal

This article is for any athlete who’s trying to improve numbers on any type of dynamic pulling exercise. These include not only the Olympic lifts but also shrugs, power cleans and snatches, and snatch-grip high pulls.

Every exercise is made up of a start, middle and finish. While all parts must be done correctly for that exercise to be productive and in order to handle heavy weights, the finish is usually the reason the maximum attempts are either made or missed.

In many cases, the athlete’s form isn’t really that bad, but he doesn’t fully extend when he’s snatching or cleaning because he’s lightning fast going under the bar. While great speed may seem like a huge plus, it’s often just the opposite. Eventually the weight will become too heavy to rack or lock out overhead if the lifter cuts the pull.

Over the years, I’ve watched countless Olympic lifters who were able to pull the bar plenty high enough for them to get under it and rack it or lock it out overhead, yet they failed on the attempt simply because the bar never picked up any speed on its upward flight and had no pop at the top.

Try these exercises, and once you learn the technique, lean on them and make them considerably stronger. When you do that, you’ll be pleasantly surprised how much more pop you have at the top of your pulls. 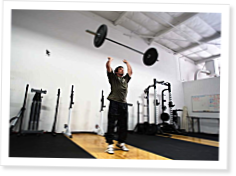 Bill Starr explains the technique for the Olympic-style press, which helped set records but ultimately ushered the lift out of competition.

In the ’60s, Tony Garcy of the York Barbell… Continue Reading

Using Workload to Move to the Next Strength Level

Bill Starr says a logbook and a calculator can help you avoid strength plateaus and keep your numbers marching upward.

When my strength gains hit the wall, my first… Continue Reading

Bill Starr explains how to sensibly integrate limit lifts into a strength program.

There are definitely two schools of thought in terms of doing singles in a strength routine. Some… Continue Reading

7 Comments on “More Pop at the Top”

I enjoyed this article. I'm thinking some of these might be good subs for the OLY lifts in a WOD where I have older clients who are having a hard time learning to get under it. They could be doing high pulls a bit heavier and increase the work being done.

I wish we could get some video of Bill Starr coaching. I would love to observe and hear the queing that is going on for some of this. (see how he holds the stick as described in the article etc...)

The throwing story made be laugh out-loud! My gym is in an old mini-mall and there is a wine selection accross the hall way. Everyone knows when we are OLY lifting because the wine bottles rattle in the store! We get a lot of dirty looks! It's awesome-Too fun!

Beautiful. It turns out I've been short-changing the finish for years, to my detriment.

Although I've heard 'shrug' a million times (but not really heard it, evidently), a couple of our L1 coaches cued me to shrug hard at the top of my power cleans last weekend. Lo and behold, a ten-pound PR over my previous 1RM...for a triple.

Thanks for writing in the Journal, Bill. I'm psyched to bring these movements back into my training.

I know I sometimes cut my snatch and clean extensions short (Coach Burgener has hollared at me over this), but it's hard with no Coaching regularly if you're only doing the movement itself. These exercises are great ideas and I can't wait to try them out at the end of a workout or on off days for skill work.

Thank you, Mr. Starr, for this article. I have a hunch this is going to add some pounds to my snatch and clean and jerk and get my numbers more in line with where they "should" be, given some of my other lift numbers.

I had a similar experience, Jon.

I used Bill's advice and finished a pull for the first time ever -- I managed to power snatch a weight 5 pounds off my previous PR for a full squat snatch. Then I beat the PR by 5 pounds.

And throwing stuff in the park? That's just good times.

More articles from Bill are coming up....

It is good for me to know that Gilson (who I know cues it when he coaches) still needs to hear shrug hard. It makes me feel better about the fact that when it gets heavy I tend to forget. I am psyched about the idea of throwing...that really seems like a good way to learn to really finish that pull. PR hear I come!

agreed with Jonji! I know Kitch had fun doing these moves!