The shortest distance between two points is a straight line—which is also often the quickest route to a missed snatch.

In snatching, you don’t want a perfectly vertical bar path but rather a line that curves in toward you slightly.

With light weight on the bars, Jason Khalipa and Jocelyn Forest, work on finding the “pocket area” by deadlifting the bar, pulling it back toward the pockets in their shorts and then exploding upward with a fast and powerful jump that snaps the weight overhead.

Many athletes start the jump with the bar far too low on their legs, creating a bar path that arcs outward and pulls them forward. The result is usually bumpers hitting the deck. Coach B explains that the longer you stay back and over the bar as it rises, the better chance you have to make the lift.

When Khalipa gets on the iron, he unleashes his strength and pulls prematurely with his arms, almost muscle-snatching the weight. Forest pulls straight from the ground, forgets to find the pocket position and goes “to hell in a handbasket.”

Coach Burgener takes each athlete back in the progression from the ground to the mid-thigh to the pockets, eliminating the errors. The final step is putting it all together in one smooth, technically sound, explosive movement.

Additional reading: The Scoop and the Second Pull by Greg Glassman, published Jan. 1, 2006. 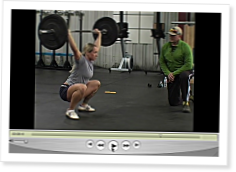 Skill Transfer Exercises for the Jerk

“I thought it was right on,” Burgener says of the skills tests. In… Continue Reading

Great Coaching--Thanks Coach B. for the points of coaching and showing us the progressions backwards if things go awry. Infinitely Helpful.

Also, let me be the first to plug Greg Everett's 2nd Edition "Olympic Lifting: A Complete Guide for Athletes & Coaches"

If you're serious about coaching or performing the Olympic Lifts, hands down, this, in conjunction with Coach B's infinite wisdom is a two-step punch towards achieving prowess with the Olympic Lifts.

It's available on the Catalyst Athletics Mainsite: www.cathletics.com

I bought those posters after seeing them in an earlier video. Love using them to help people see the bar path. I bet the guy that sells them will have his sales go up this week!

Love these vids. Coach B is the MAN

It's so great to have access to good weightlifting instruction! Thanks Coach B. I'm gonna go into the garage right now and do a little snatch work with the video camera...

Kevin- So where do you get those posters?

Coach B.- Thanks again!

I've seen this box in quite a few vids and I gotta say. It's a great training environment. It looks huge. All business!

Kevin- Yeah, where did you get them? I've seen them also for the Clean and Jerk, deadlift, back squat... etc. I'd love to order some for my Gym.

Gang, Kevin clued me in on where to find them. www.newton-sports.com

Gang, Kevin clued me in on where to find them. www.newton-sports.com

Thanks so much for allowing CF to put these videos up. With the nearest certified Oly coach being almost 2 hours away I can't get this type of coaching. But anytime I do snatch/clean and jerk work I watch these vids and write down cues, coaching points, etc. Thanks...