Strength expert Dave Tate of Elite FTS explains that training heavy is far harder on the body than sub-maximal work and can require up to two weeks of recovery.

“To do max-effort work every day, it really should not be done, all right?” Tate says. “It’s going to hinder progress, and most of the people aren’t going to be in shape to do that.”

In this video from a private seminar held Jan. 9, 2009, at CrossFit San Diego Tate talks about recovery, the max-effort and dynamic methods, as well as how to approach a heavy single.

With reference to rep charts developed in the ʼ70s by A.S. Prilepin, Tate explains that performing more than four heavy singles above 90 percent of your max is ignorant and counterproductive. Even if you think you have more in the tank after hitting a PR, you’d do well to leave it there for the next workout.

“Even if you break the record, it doesn’t make any difference,” Tate says. “You’re only risking injury. See ya later. You’re done.”

Additional reading: CrossFit and Powerlifting by Jason Bagwell, published May 1, 2005. 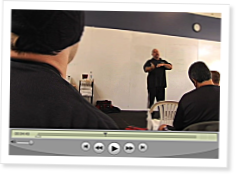 Dave Tate of EliteFTS tells Tony Budding that all mental training for athletes comes down to one thing: creating self-confidence.

In part 1, Dave says: “You need to find out what is the driving… Continue Reading

Good at Everything or Great at Something

“I’m a meathead,” says strength and powerlifting expert Dave Tate of Elite FTS. “I have to do what I like. I want to make (my clients) stronger.”

Tate may be focused on the kind of… Continue Reading

Dave Tate of Elite FTS isn’t afraid to call something “worthless bullshit” and then suggest a better way.

In this video documenting a private seminar held Jan. 9, 2009, at CrossFit… Continue Reading

The requested URL /public_html/library/premium/pdf/CFJ_Tate_TrainingRecoveryME.pdf was not found on this server.

Video is showing up as a PDF article, so I can't access it.

Sorry folks. We misclicked a key button. It's fixed now.

Now my question is CrossFit generally does 7x1 for single max efforts. According to Dave going above 4 becomes counterproductive or eats into recovery. Is the 7x1 a CF method based on the infrequent exposure to maximal training? Meaning, Dave may use 4x1 but they are training maximal more frequently.

My two cents on Rob B's thoughts. 7x1 is still consistant with Dave's recommendation if one does not exceed 90% of ME with the first three lifts. Generally, the first three are simply warm-ups with the fourth lift being at or slightly below ME. Also, because we are not a community of powerlifers, our ME's may be more perceived ME rather than the actuals Dave refers to when he talks about what lifters think they can do versus what they can actually accomplish.

Thanks again to Dave and CFHQ for letting us learn from the best.

I was doing the max effort thing too often when I was training for my first marathon at age 50. It kept me from hitting a 4hour marathon. Was happy with the 4:13. I can't really make any ligit correlation between aerobic and anaerobic activities and maximums, but the body likes rest and not max efforts all the time. Intensity I am sure is a whole different arguement.

I would love to hear/ read about what Dave Tate recommends for a periodization into the singles lifting day... for example, 3 sets of 3 at 70-85% leading up to singles, etc. I know for me, I can't just warm up and start in on heavy singles.. I need to acclimate to heavy load and then start trying for somewhat max efforts.. as well for injury prevention.. and what accessory work should we do when doing max effort work on D.L. vs, Squat, vs, Press, etc. That accessory work would be a good tool for post workout work.. thanks Dave, I think this was the best video so far. I did some powerlifting when I was younger training for power for wrestling and to gain some size and power. Keep the good stuff comming.. thanks again.

Getting an incorrect link.

Is there any chance of making this video viewable on the IPhone like the previous journal post? Being able to watch this stuff on the metro is greatly appreciated. Thanks.

What are the charts that Dave mentions when talking about the 4 lifts over 90% ME rule? It sounds like "Pelipin's charts." Google isn't yielding anything, so I must be off-base.

Jeff, I found this on Dave Tate's EliteFTS site through a google search.

I personally don't think the two are entirely consistent. If you watch previous videos in the CFJ discussing how many don't go hard enough on the lifts/strength days, there was a comment made that even the first rep of the 7 should be at about the 90% range, or else you are not going full out. So if we are to listen to Dave, an adjustment would probably be needed. Notice that CFT still falls within reason (though maybe the overlap between Squat and Dead might be troubling).
In any case, I wonder what the difference is between elite lifters (Tate) and Crossfitters.

Anyone know what he means by grip strength indicating level of recovery? Is he saying that your grip strength can show how overall recovered you are?

Also, the Prilepin chart was based on olympic weightlifters (as stated at the Elitefts page). These guys didn't do anything else (well...) but lift weights. As crossfitters, we do a lot of other stuff that affect recovery in different ways, which makes it even more relevant to stay at the low end of the spectrum when it comes to the number of reps.

When it comes to the level of training, and how a crossfitter might differ from a powerlifter, I would imagine that the recovery period would be even longer for the average cf'er. This would be logical since the repeated maximum effort training actually enhances the recovery capacity of the central nervous system, as argued by guys like Siff and Zatiorsky. Of course, this may be somewhat balanced up by the fact that people doing a lot of ME training will have trained their CNS to recruit more motor neurons, which also fatigues the CNS a bit more. But overall, I would think that a crossfitter who is doing "real" training maxes should be careful with volume when it comes to maximum effort lifts. I have found this to be true in my own training as well.

Anton, all your questions can be answered by reading Louie Simmons articles on Westside-barbell.com. Louie is the coach that Dave refers to in some of the videos.

If you do a different lift (i.e back squat then max weight pull up) does it matter about recovery? I have heard of many boxes that do a max (wheather 1,3,or 5 rep max) of different lifts prior to each WOD. Is this wrong? There are so many differnt lifts to become stronger at and if we had to wait 7 days before doing another max lift we would touch each lift very infrequently. Thanks for any feed back.