Tucker in Ireland: The Back Tuck With Helzy by Jeff Tucker - CrossFit Journal

Tucker in Ireland: The Back Tuck With Helzy

The Irish are literally head over heels for Jeff Tucker of GSX Athletics.

Leaving the Lone Star State for the Emerald Isle, Tucker visited Elite 400/CrossFit Northern Island on Aug. 29-30, 2009, for a cert at the site of the Europe Regional Qualifier for the CrossFit Games.

During the cert, Tucker taught an athlete named Helzy how to do the back tuck by taking her through several progressions before spotting her as she performed the movement. After landing on her bottom in front of a supportive group, Helzy found a better landing and posed for the “judges.”

“This is how I used to pick up chicks in the bowling alley,” the gregarious Tucker said of the back tuck. “No shit. Throw a strike, do a back tuck—they think you’re kind of sexy.”

Bowling-alley romance aside, Tucker says the back tuck is also good for self-esteem and learning how to move your body.

Tucker was head coach and director of Texas Christian University’s gymnastics/cheerleading programs from 2001 to 2006 and now conducts CrossFit’s Gymnastics Certifications. 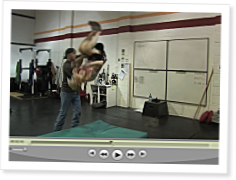 “It’s not just a cool party trick where you get free beer on Saturday night, although I’ve won some free beer on this,” Jeff Tucker says. “It’s a different way to load up your core. It’s a… Continue Reading

At the 2011 Summer Affiliate Gathering recently held in Big Sky, Mont., CrossFit Gymnastics coach Jeff Tucker instructs an athlete on the technique of the kipping pull-up.

CrossFit Gymnastics coach Jeff Tucker shared his expertise at the 2011 Summer Affiliate Gathering in Big Sky, Mont. In this video, he instructs an athlete on the kipping… Continue Reading

13 Comments on “Tucker in Ireland: The Back Tuck With Helzy”

Man that is awesome info, I grew up with a trampoline, my brothers and I mostly used it for a wresling ring! We never had any idea how to do back flips, makes me want to head home and try a couple! Also that due could be Mathew conohie's uncle!

Hmm, I may have to be willing to do standing backs in public then, Tuck. Ways to impress CF chickies besides Fran and Cindy and moving and throwing heavy lifts around besides rings stuff and HS. Hopefully it pulls better than flags do as they only seem to be cool to a few gals.

If you do stop frame the video, you can see Helzy actually jumps back at nearly a 45 degree angle. It's very common and only gets fixed with a lot of effort over time. It also induces the backward travel from the starting position to where the feet land and decreases the amount of time in the air to flip.

If the body is an arch in the air it can hip flex or tuck so much. If you stop frame, you'll see her truck is nearly horizontal before she turns over her lower body. Hence why you want to jump straight/hollow without arching the back.

On the third attempt you'll see that she throws her arms and then bends the elbows. Very common and I call it going fetal. It's very common to throw the elbows back instead of hands up.

I was very impressed by the difference between the first and second session. More than likely there were a lot more attempts in there. That's as good as many of the kids in the gym.

I prefer to have people in the gym jump off a firm surface but I don't think it actually makes much of difference since her feet sink through the mat toward the ground. If it didn't, I think it might. Going off a small plyo box the same height of the mat gives a little more time to rotate but getting on too high of a box makes it freakier (but easier to rotate over).

Doing a standing back tuck is probably just as frightful and intimidating as a power or squat snatch or snatch balance. It definitely shows some cajones.

And that is why doing them with many crossfitters is very fun, easy and cool. Ability to jump and leg lift with some guts and voila!

damn, and i just sold my old trampoline. Ill be trying this sometime somewhere for sure. Any tips on spotting someone?

Excellent video. I have always wanted to learn the back tuck. I have recently bought two floor mats similar to the one in the video that fold into quarters with the intent on learning some gymnastics/tumbling moves.

The mats serve another important function in that the primary reason I bought the mats was to minimize noise with dropping bumpers, since my gym is in my condo. They work excellent for that purpose also!

Is it just me or have other people started assuming every movement HQ puts a tutorial in the journal will probably be in the games next year? Tony Budding's ring dip, Jeff Tucker's back tuck...what's next? Can you imagine 21-15-9 ring dips and back tucks? FML.

I was just listing "Back Tuck" as one of my goals to accomplish and what do ya know, an instructional video on the Back Tuck. Must be my lucky day. Now if I can only find a matt. Hmmm!

I'd just like to say what doesn't transpire through this vid is the R-A-G-I-N-G hangover I had while filming it...lol :)

Helzy-
Maybe that's why Tucker is laughing so much?
You still look great!

On the topic of Mats- I found a cool site with good prices while shopping arround for my "Gym Wishlist".

Helzy! Fun times seeing this. Hell we were all hung over... I think?!!!

Blair - that is not how I normally go about it as well when teaching it. But sometimes mats are our friends when doing first time manuvers as you well know, sometimes you just got to take a pigs ear and make a silk purse out of it. I think in the vid we discussed lightly about the matting we were using - but I can't reacall right now. Hell for that matter I love using an overhead suspension gear at GSX - so does my back ;)

You would be wrong on one item - Helzy threw very few attempts in getting up and around. I was impressed with her abilities to step up and just attempt it for a first time. The important yet small cues to correct body forms in her tuc do not happen in a single session - but over time and with more instruction as you can overload the individual with too much to think about. The first time throws are more about getting up and around and knowing you are going to make it with a spot - particularly after a night of good Irish beers...

We only filmed the two short sessions combined for a total of 12 minutes of film. She did a lot of work in a very short time (because we had class to teach and I do not normally allow back tucs being taught in the cert) and that is cool. I get lots of requests for more advanced movements - and we are going to start filling that bill for Tony Budding and the CF community.

I loved Helzy and Johnny, they are the real deal and wonderful people. many go through life not ever having met folks such as them, and that is sad, because Johnny and Helzy have changed my life. They make me want to be a better person, a better coach, and they have taught me how important it is to be true to ones self. They live on MY Island! I love them both dearly.

Cody - I was laughing because Helzy makes you smile and laugh. Her almost inaudible, softly spoken, irish twang, of "yes please" was just too cute - and it made me giggle every time. I miss her so much.

wtf- I need to hang out with more Texans and ask my dad if ever heard anything remotely like that when he was in TX and the Army.

Tuck, I don't use an overhead spotting rig nearly enough. Most of the times when spotting adults or teens, I'm hoping as well to just show them they can get over safely with my spot (learn to trust me as a spotter and in themself) and not break anything. Many of the tumblers and adults get real squirrely when I put them on a spotting block in front of a wedge (even though it's at the same height). Perhaps I'll start doing this after the initial spotting. Big adults in a rig probably means just as much work for me at first.

Helzy, hungover back tucks. Damn, I can only imagine what that felt like, especially in the air. I'm sure there may be some attempting of this in the upcoming weekend.

Great video Jeff, I like your style and comments about going through life and only meeting a certain amount of wonderful people. I suppose its what makes it all worth while! As an Irish Crossfitter from Dublin, I can safely say the northys are good stuff, ive met many legends from up north on my journey so far. Just landed my first back tuck last night in the park after a WOD. Another thing that makes it all worth while!!! Keep up the good work.